The dreaded market correction has finally hit the cryptocurrency market this past week, leading to a sea of red as that was triggered by a slew of unfavorable events and news. Here’s how some of the most popular cryptocurrencies performed as the bears took over.

Bitcoin continued to extend its downward spiral initially triggered by Tesla CEO Elon Musk's tweet about Bitcoin mining. Its price barely got a chance to recover from a sell-off before the news of China’s latest actions against cryptocurrency triggered some more selling. 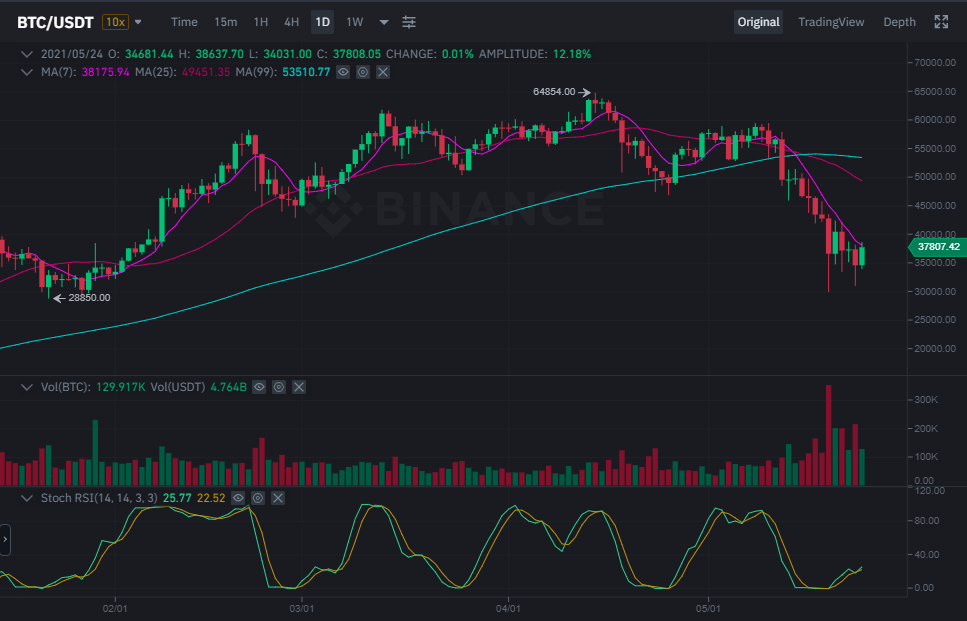 Bitcoin has tanked more than 15% in the last seven days. Its price traded as high as $45,700 and dropped to a $30,000 low, where it gained support and has since recovered substantially.

Doge is one of the most talked-about cryptocurrencies in 2021, courtesy of its impressive growth. The hype failed to deliver, causing many investors to lose patience. The rising FUD also contributed to a cocktail of bearish momentum that pushed down the price to a weekly low of 0.21 during the Wednesday crypto carnage. 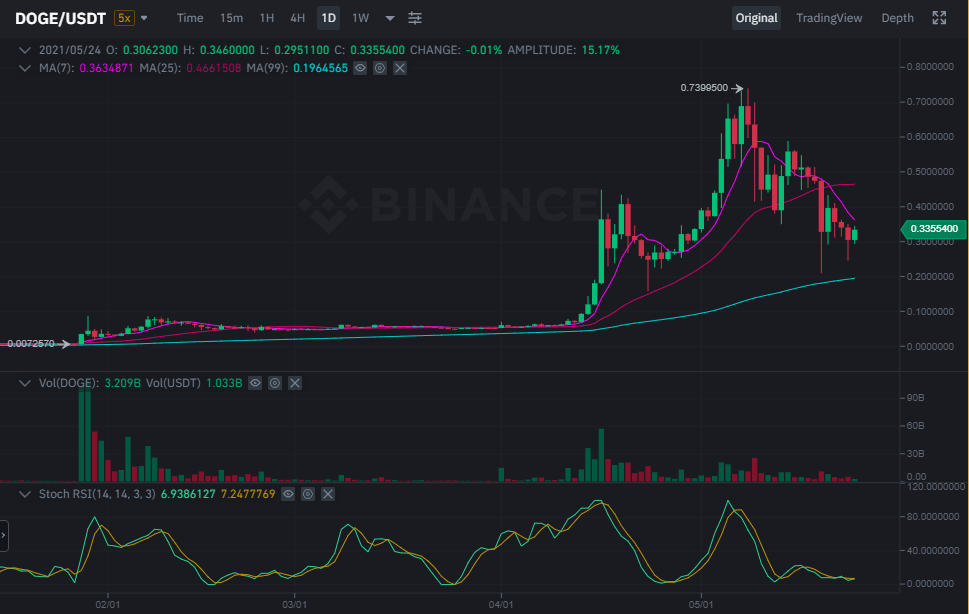 Dogecoin has since recovered some of its lost gains and is now trading at $0.33, which is still significantly lower than its $0.55 weekly high. Nonetheless, its price has tanked more than 30% in the last seven days. The latest bear market found support near the $0.22 level, and the price is still in the oversold region, which means it might experience a significant uptick if the bulls regain momentum.

Ripple had a bad week after a recent judicial ruling favored the SEC in their legal battle. The judicial ruling allows the financial regulator to request information regarding Ripple transactions from regulators in other countries outside the U.S. 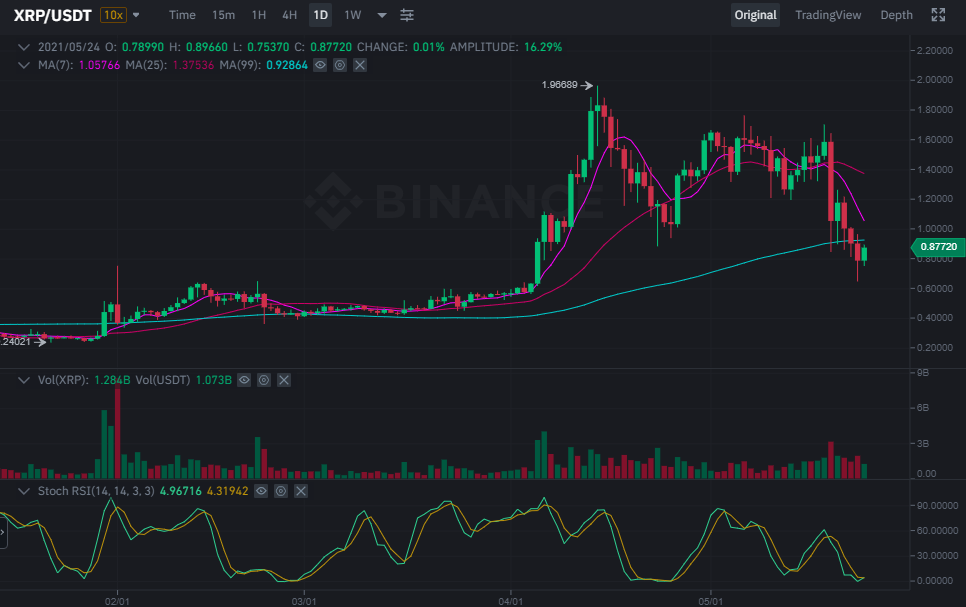 XRP went on a free-fall after news broke about the judicial ruling, coupled with prevailing FUD in the cryptocurrency market. The cryptocurrency tumbled by nearly 34% on Wednesday alone and has crashed by more than 42% in the last seven days, from a weekly high of $1.70 to a weekly low of $0.75. Doge fans remain optimistic that this new week will bring good tidings as far as price recovery is concerned.

Cardano kicked off the week as the only cryptocurrency that seemed immune to the selling that took place in the crypto market after Elon Musk's Bitcoin mining tweets in the previous week. However, it could only oppose the overall market sentiments for so long and eventually turned bearish and lost its gains of the prior week. 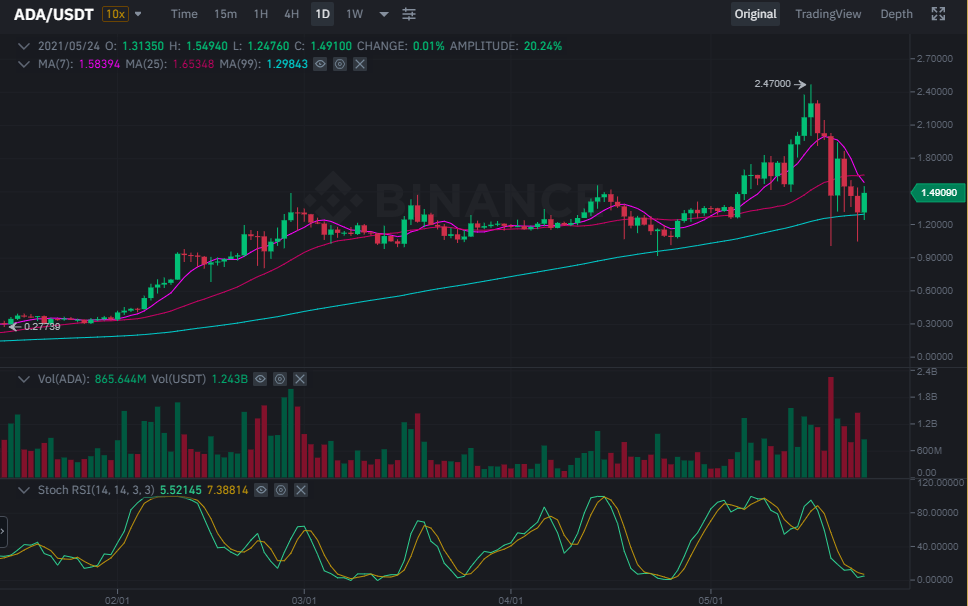 ADA gained support at the 1.00 price level after tanking from its 7-week high of $2.40 to a $1.01 low. It has since then recovered to $1.54 at the time of this press, which is still in the red by more than 25% in the last seven days. The recovering bullish momentum in the last 24 hours coupled with the fact that it is still oversold indicates potentially more gains in the near term.

Dubbed the Dogecoin killer, Shiba Inu is another cryptocurrency that has been hyped up in the last two weeks as investors looked for new cryptocurrencies that they could ride to the moon. Unfortunately, the cryptocurrency failed to deliver, instead tumbling to a new all-time low of $0.0000063 at the height of Wednesday’s bear market. 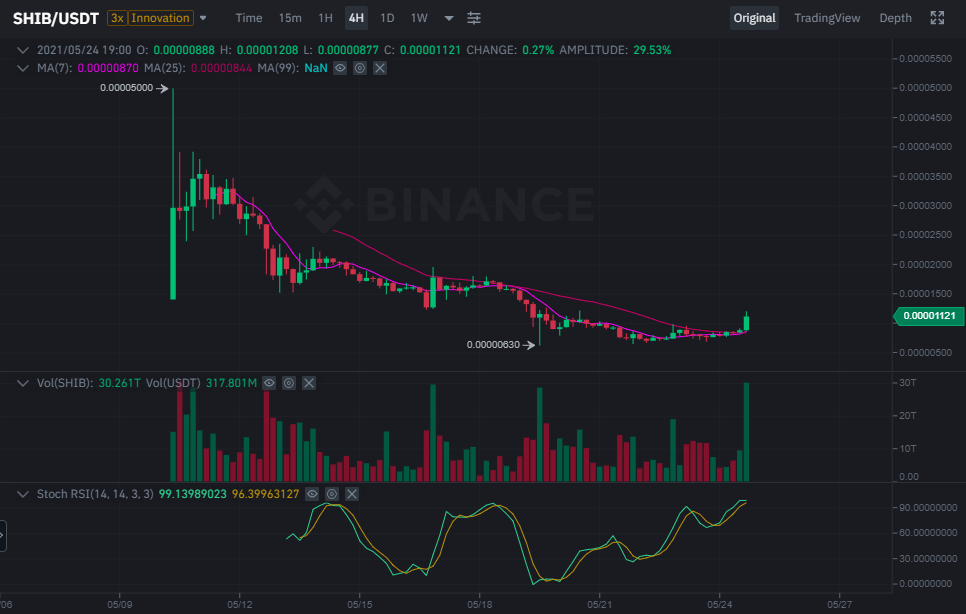 Shiba Inu’s bearish downturn was likely fueled by uncertainty and fear that prevailed after the Ethereum CEO burned 90%  of the Shiba Inu he received and gave the remaining 10%  to a charity. However, it was probably a good development considering that a substantial amount of the cryptocurrency is now out of circulation. Shiba has rallied more than 40% in the last 24 hours, but its current price point indicates that it has lost more than 31% in the last seven days.

The bears may have prevailed in the last two weeks, but they seem to be losing steam, which means that they might not be in control for long, especially now that power has shifted to the strong hands. The market may continue to experience strong price recovery in the event of postivie market news this week.