San Francisco-based Theta Labs is the software company behind the THETA token and blockchain which aims to decentralize the video streaming industry.

The content streaming industry is currently one of the most lucrative entertainment segments in the world. However, it is a highly centralized industry which means the same companies that host the content have a lot of control over things like censorship and the quality of content that comes to the market. They are also tasked with building and supporting the infrastructure necessary to facilitate high-quality streams.

THETA platform hopes to overcome most of the issues associated with streaming. For example, content streamed on THETA cannot be censored and the company’s goal is to use nodes on the network to relay content. This strategy should bring down content distribution costs while making 4K and 8K streams possible with minimal loading times. Note that this blockchain network is based on the Ethereum network which means it supports fungible and non-fungible tokens, as well as support for smart contracts.

The role of THETA token and Theta Fuel (TFUEL)

The THETA token is currently used for staking on the network and it will be a vital tool for governance on the platform. Meanwhile, Theta Fuel (TFUEL) is used to facilitate transaction fees linked to the movement of any token on the network.

THETA token peaked at $15.88 in April during the 2021 crypto bull run, which is impressive considering that it hit hovered around $0.03 in March 2020. The latest market consolidation wiped out some of its gains, and it is currently trading at $9.78. 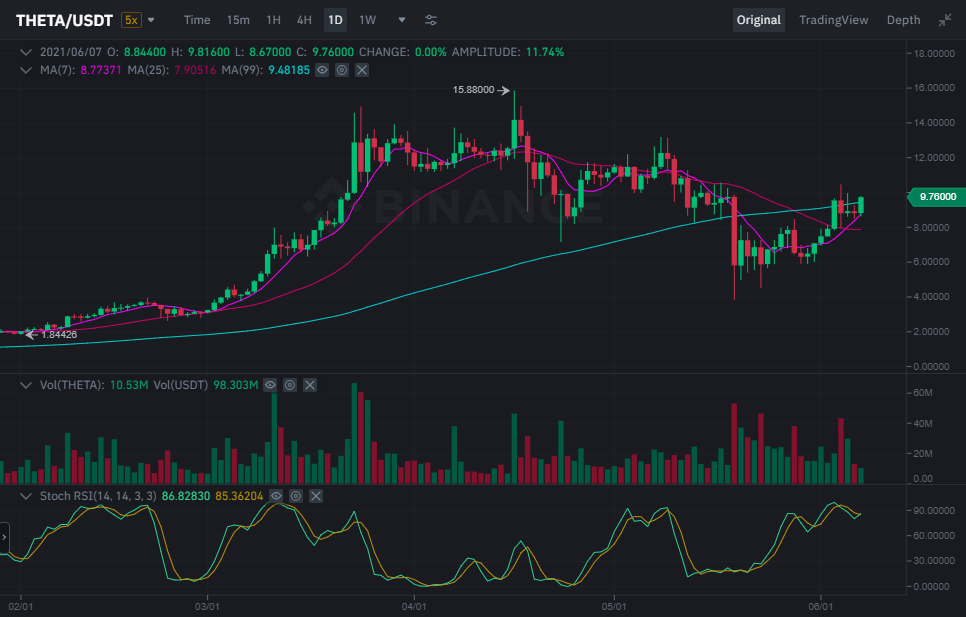 TFUEL has also been heavily bullish this year, as its price traded from as low as $0.02 earlier this year to its historic peak of $0.56. It is currently trading close to that ATH at $0.49.

Understanding the structure of the THETA platform may provide better insights into potential price moves. The THETA blockchain can support 30 validator nodes which means it is still partially centralized. THETA Labs runs those validator nodes in partnership with major companies such as Samsung, Google, Sony, and Binance among others. However, it uses guardian nodes to make the network more decentralized.

The role of guardian notes is to double-check the blocks made by validator nodes. There are also edge nodes that run the THETA Edge network. The latter is the first peer-to-peer decentralized delivery network. The upcoming Theta 3.0 mainnet launch will allow edge nodes to stake TFUEL, allowing them to achieve elite edge node status in which they can earn additional TFUEL. The amount earned through staking will depend on the TFUEL amount staked and network uptime.

TFUEL’s price might be in for some interesting times ahead considering that THETA will burn 25% of the fees generated via the Edge Cast network. TFUEL might thus be deflationary, which is good for its long-term value.

About 16 enterprise validator nodes are remaining. However, the limited nodes highlight limited growth for THETA token but the THETA network is arguably still in its early days. More adoption might benefit its growth. On the other hand, TFUEL has a lot of growth potential given that its market cap is roughly a fifth of THETA.

There are economic incentives to participate in Elite Edge nodes and also philosophical incentives to uphold censorship resistance. These factors alone could fuel more parabolic growth, but investors should also consider that there is constant selling of TFUEL earned by the validators. This selling could prevent an aggressive rise in the token’s value.