Three weeks have passed since the cryptocurrency market seemingly concluded the strong bearish pullback that took place in May this year. Many traders anticipated a strong bullish recovery, only for prices to be stuck in a ranging market that is now concluding its third week. Here is a recap of what happened in the market this week.

The expectations of a Bitcoin rally above $40,000 were shattered by a slew of unfavorable news including the FBI’s win in the Colonial Pipeline investigation. The federal authority managed to recover Bitcoin worth $2.3 million and early reports suggested that the FBI hacked Bitcoin to recover the funds. However, those reports were not true because Blockchain cannot be hacked, but unfortunately, the reports quickly spread FUD, leading to BTC sell-offs. 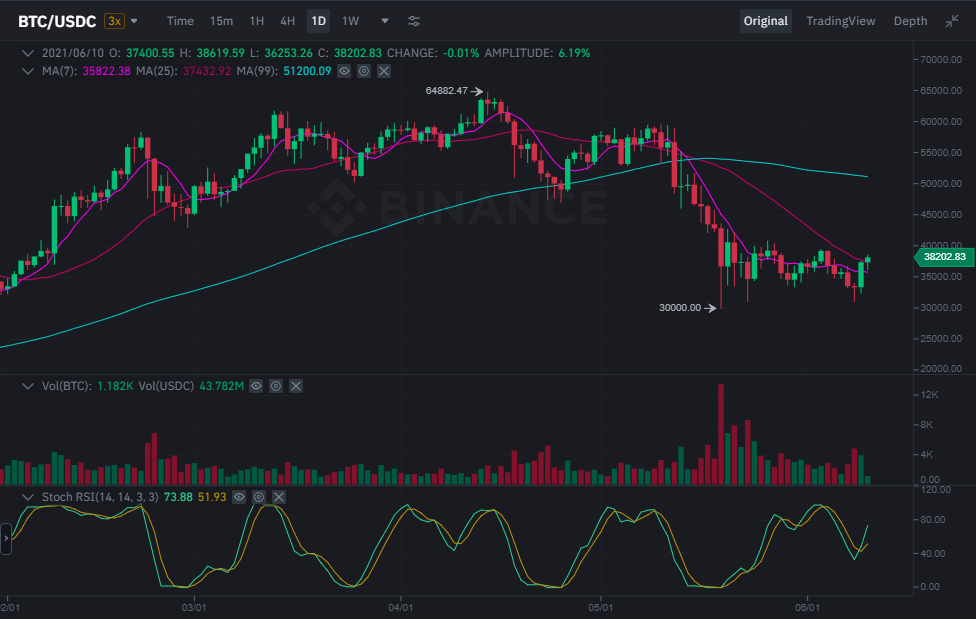 BTC’s selling pressure was strengthened by increased concerns about the use of cryptocurrencies being used to facilitate hacking activities. Those concerns were ill-advised because the blockchain network is public and transactions can be traced. Nevertheless, the selling pressure saw Bitcoin drop from a high of $39,481 on Thursday last week to a low of $31,021 on Tuesday. The price has since recovered and is currently trading just above $38,000 after gaining more than 11% in the last 24 hours.

Ripple has been locked in a legal battle with the SEC for quite some time and this has been detrimental to XRP’s price performance. The U.S regulator was ordered by the presiding court to provide Ripple Labs with documents of its internal communications on ETH, Bitcoin, and XRP. However, the SEC requested a 2-month extension of the deadline to provide those documents. An extended deadline means the documents could be changed and this is concerning to XRP investors, thus the subdued trading activities for XRP due to the uncertainty involved. 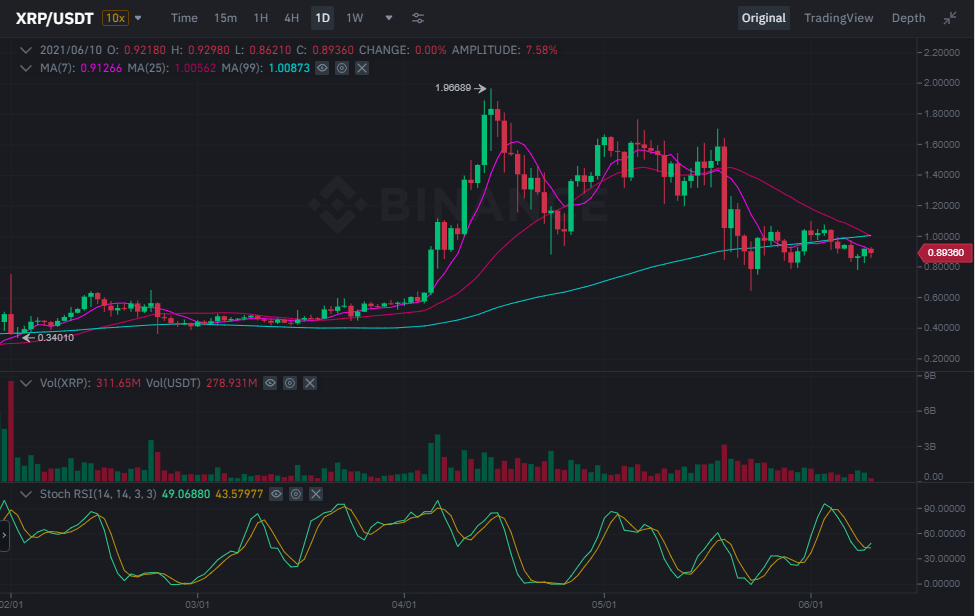 XRP has been trading between $0.99 and $0.78 in the last two days and trading volume has notably dwindled. It is currently trading at 0.89 but has the potential to soar if the legal row is concluded in Ripple Labs’ favor.

Solana has been gaining popularity this year as one of the most advanced blockchain projects thanks to its proof-of-history mechanism which makes it one of the fastest blockchains out there. Traditional consensus mechanisms like proof-of-stake are receiving negative criticism because they make mining energy-intensive and expensive. Solana's native token SOL is up more than 14% in the last 7 days. Its impressive gains are largely supported by recent developments including reports that Solana Lab’s latest funding round raised $314 million. The funds will be used for DeFi developments and also to make its blockchain faster. 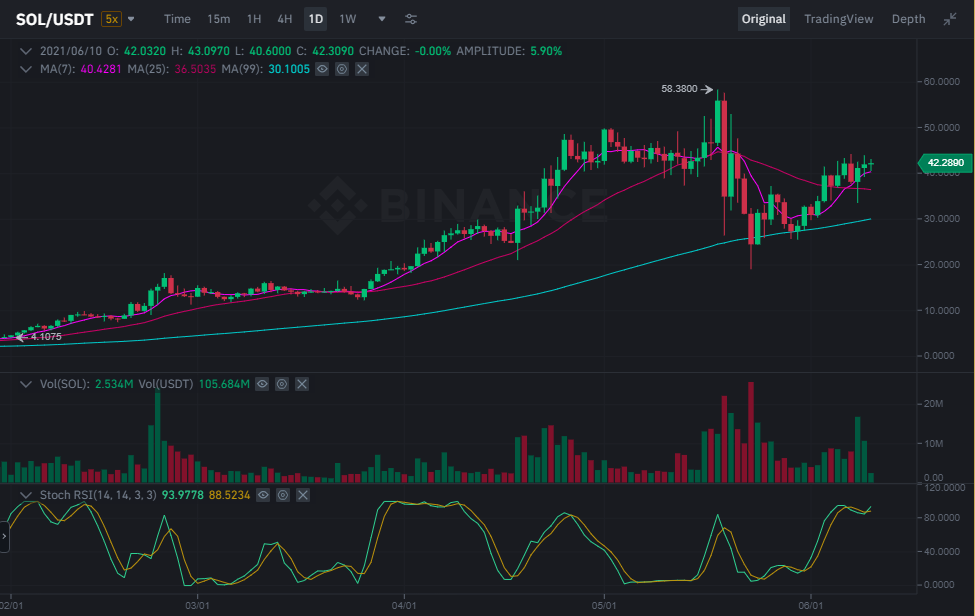 The SOL token has maintained bullish momentum in the last 5 days and is currently trading at $42.28 although its price seems to be experiencing resistance at its current level. The stochastic RSI also indicates that it is in the overbought zone and buying volume has been decreasing in the last 3 days.

The Internet Computer’s ICP token has continued its downtrend this week. It has tanked by more than 30% so far this week, making it one of the biggest losers in the top 20 cryptos. Internet Computer is one of the most promising blockchain projects but its ICP token appeared on the market with such a high price tag that most of the initial holders were likely incentivized to sell. 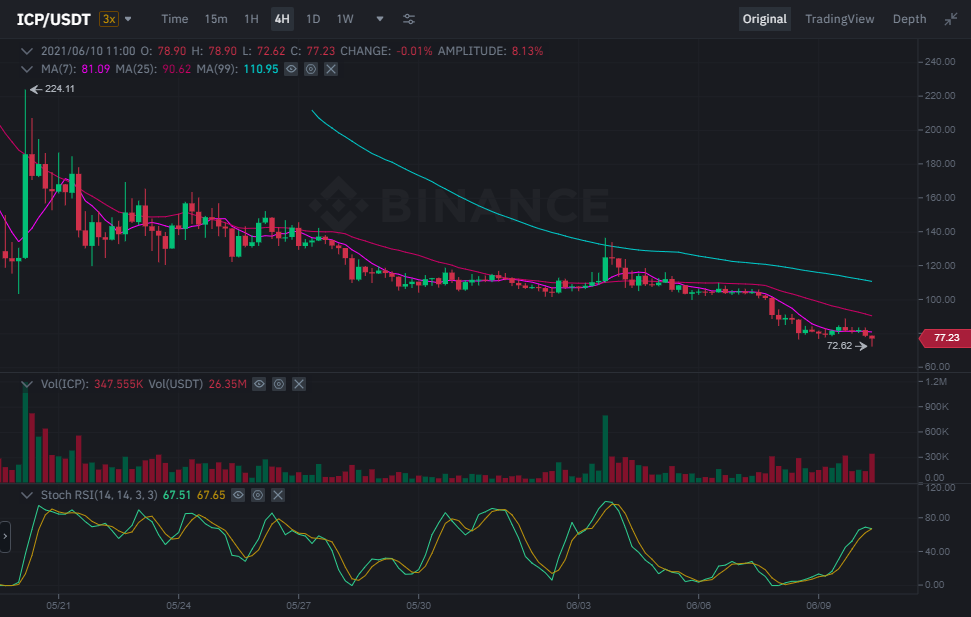 ICP is currently trading at $77.23 and could potentially have some more downward pressure. The current price level indicates an increase in selling volume while the Stochastic RSI still indicates that it is still in the overbought region. Although ICP looks like it has a bright future, it still has to battle it out with other blockchain heavyweights such as Ethereum.