FUD-driven price swings in the crypto market have become the norm as was evident in the last few days. For example, the market turned bearish towards the end of last week after reports that the FBI managed to break into the wallets of the hackers involved in the Colonial Pipeline cyberattack.

The market is now recovering from that bearish performance and the recovery happens to be driven by some positive news. Here is a recap of the latest developments in the crypto market. 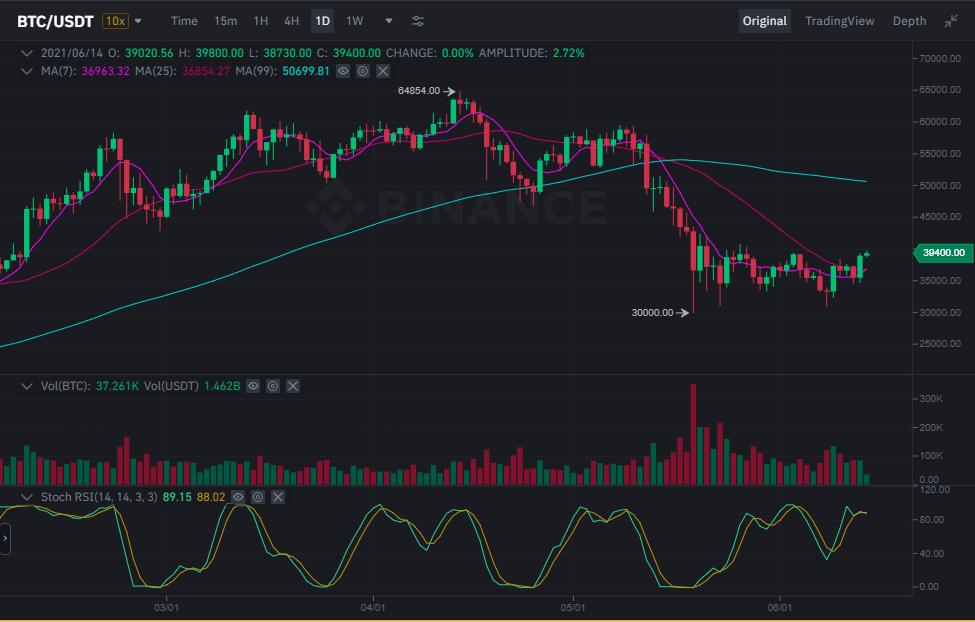 Bitcoin is currently trading at $39,400 and its latest price uptick is courtesy of Elon Musk. The Tesla CEO revealed that his company might start accepting Bitcoin again as payment for Tesla EV sales. However, the decision to resume BTC transactions for vehicle sales will be based on whether more than 50% of Bitcoin miners will use clean energy. The current price level is testing resistance near the $40,000 price level.

ETH recovered from its May low of $1,728 and has been trading above $2,000 but its price has been stuck in a ranging market for almost three weeks now. It is currently trading at $2,474. 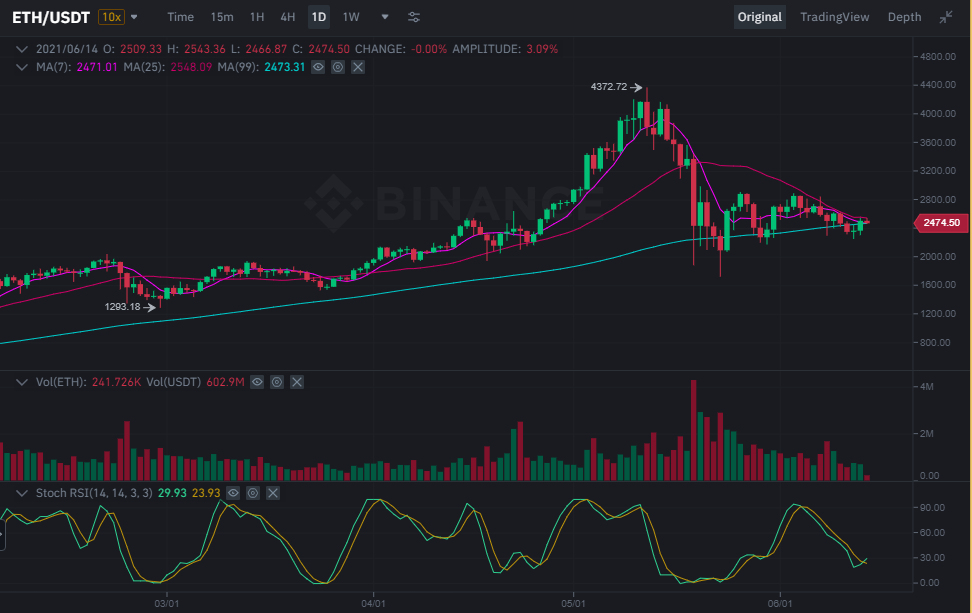 ETH’s price still has some ways to go before it reaches its previous all-time high but there is a chance it could gain a lot more value especially with the upcoming Ethereum 2.0 launch. The Ethereum network has been rapidly growing and more growth will likely take place in the future, helping its native cryptocurrency to potentially elevate to new heights. Ethereum is up 7.12% in the last 24 hours but its current price is still down 9.90% in the last 7 days.

XRP is currently trading at $0.8732, which means it is still heavily discounted. Its performance has been severely limited by the ongoing legal battle with the SEC. 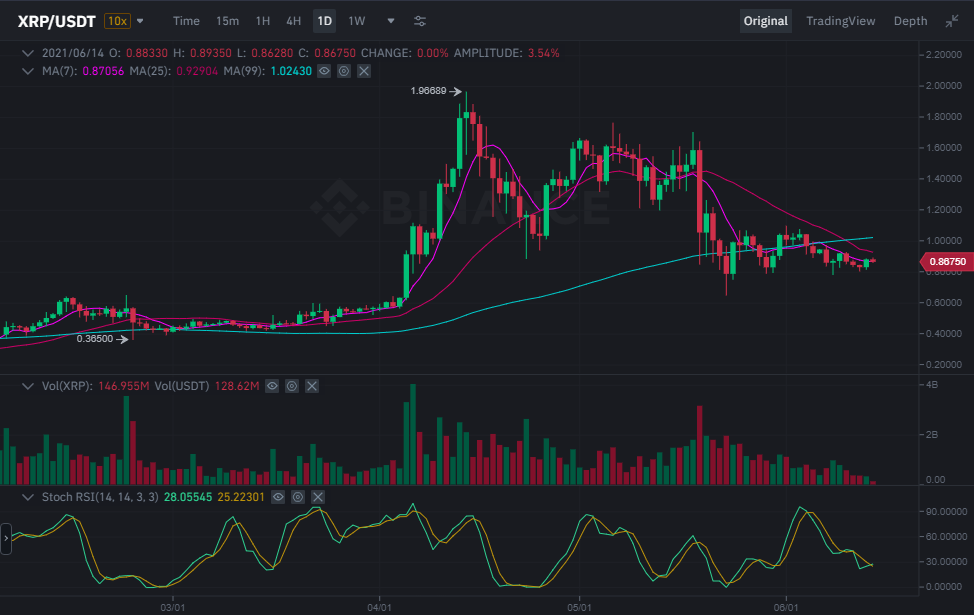 XRP’s trading activities in the last 7 days have been relatively low, probably due to the concerns and uncertainty around its legal row with the SEC. Its subdued performance is also reflected in the low trading volumes. The cryptocurrency has been experiencing heavy support near the $0.78 price level and is currently coming off an oversold region according to the Stochastic RSI indicator.

Cardano has solidified its position as one of the most promising blockchain projects that is competing with other heavy hitters such as Ethereum. It has been growing at a rapid pace and its performance reflects well on its native cryptocurrency ADA. 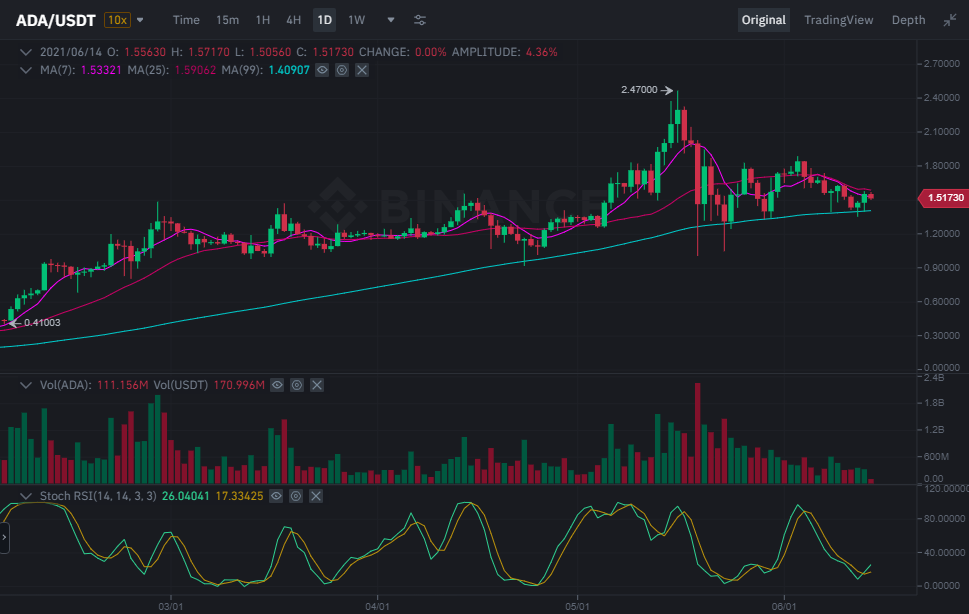 XRP tanked by 8.57% in the last 7 days but it has recovered by 6.00% in the last few hours as per the time of this press. It is currently trading at $1.51 which is still significantly lower than its ATH of $2.47. Its volume indicator shows that there is some selling volume albeit weak selling and the Stochastic RSI is the oversold region. A positive trigger could easily result in a strong bullish price recovery.

DOT experienced significant bearishness in the last 7 days which saw its price drop by  8.57%. However, its 24-hour performance indicates a 6% recovery. 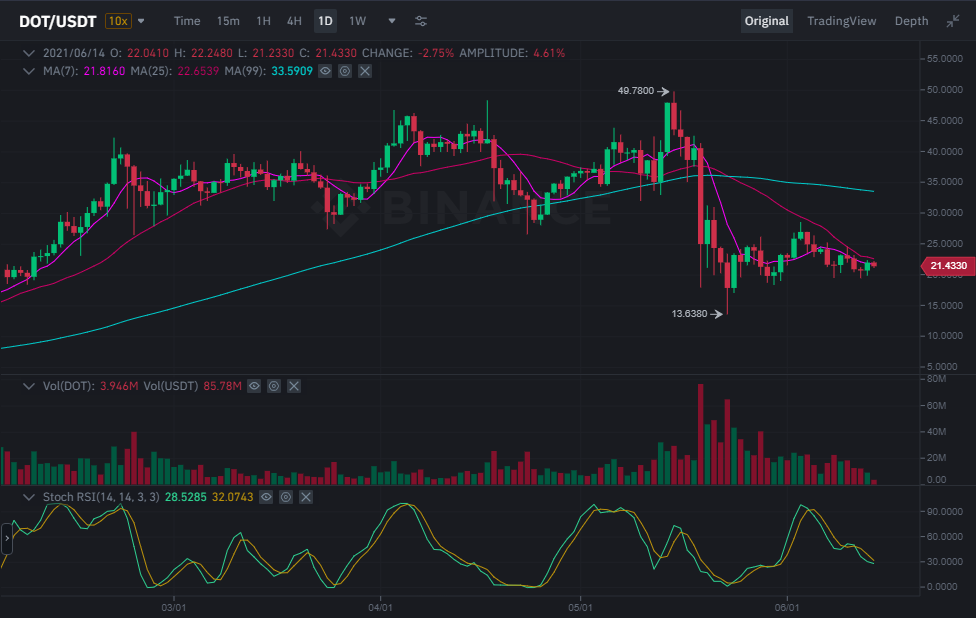 Polkadot’s strong bullish performance this year was interrupted by the market correction in May but its performance in the last two or three weeks indicates that it is in a ranging market. Fortunately, selling volume is diminishing and the Stochastic RSI indicates that it is now approaching the oversold region. Polkadot is one of the most promising platforms because it offers blockchain interoperability, meaning that the DOT token could potentially enjoy reasonable gains in the near future.