The Dogecoin Hype Appears To Be Losing Steam: Will It Regain Its Former Glory?

Dogecoin was one of the most popular cryptocurrencies in the first half of 2021 during which it enjoyed robust growth. Its price grew from as low as $0.004 on January 1 to its all-time high of $0.73 on May 7.

Most of the cryptocurrencies that have registered similar or more impressive growth in Q1 2021 have development teams and cleverly laid out roadmaps and projects. Some of them have specific use cases but Dogecoin lacks such support. One might thus wonder why Doge enjoyed such a strong rally and more importantly, whether it can continue tapping into more growth. A look at the reasons behind Dogecoin’s gains may provide insights into its performance in the future.

Riding the wave of retail hype

Earlier this year a wave of retail trading took place on Wall Street by retail investors buying shorted stocks such as GameStop. Their assault was so successful that they started looking for more opportunities where they could tap into overwhelming gains. The cryptocurrency market was ripe with such opportunities and Dogecoin was one of the digital assets highly favoured by many retail traders.

Doge did not have much going for it, but it did have meme status, which meant that memes could easily go viral, thus spreading awareness about it, and subsequently fueling more investment. As a result, its price experienced parabolic gains and people started seeing its potential. It even attracted the attention of Tesla CEO, Elon Musk, who’s support for the memecoin and regular Tweets earned him the title ‘Dogefather.’

Billionaire investor Mark Cuban also gained interest in the cryptocurrency and contributed to more hype and bullishness for Doge. However, Musk has been the single largest proponent for Dogeocoin’s gains through his tweets. All the hype meant that more money was being pumped into the memecoin, thus inflating its market cap and subsequently fueling its price growth. However, that hype seems to be dwindling and it explains why Dogecoin’s performance has lately been subdued.While the price of Bitcoin recently recovered above the $40,000 resistance level, Doge’s performance has gotten weaker. 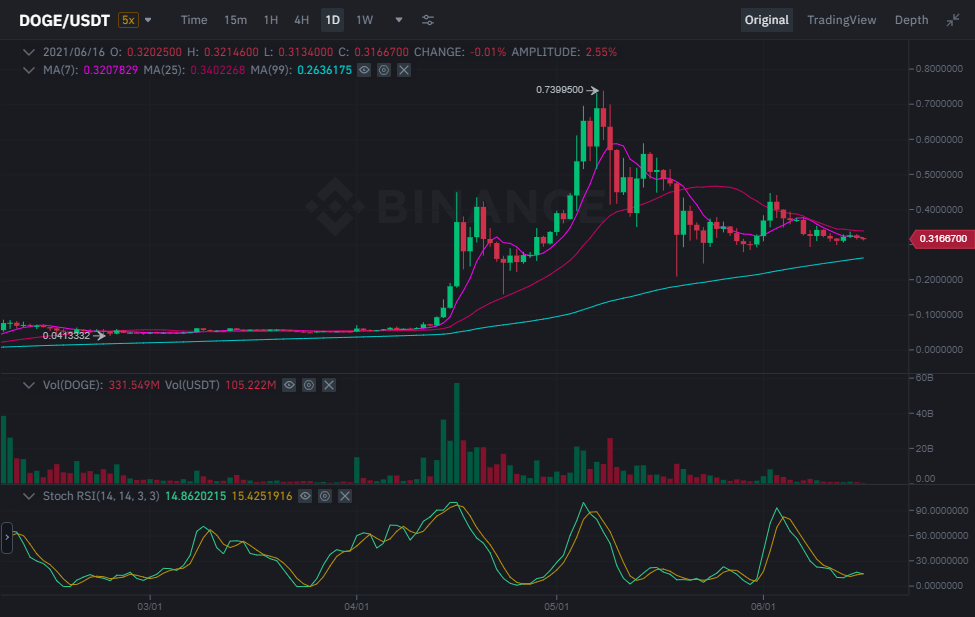 Dogecoin’s buying and selling volume has tapered out significantly in the last three weeks or so. However, it is notably trading above its 99-day moving average which means its macro trend is still bullish. The Stochastic RSI also suggests that the memecoin is oversold and a new wave of buying pressure could cause a substantial upside.

Doge’s price performance is overwhelmingly fueled by speculation, which means that it is very sensitive to market news. For example, a positive tweet from Elon Musk can easily trigger a substantial jump in its price and negative remarks are bound to cause price dips. The lack of a proper roadmap and use cases hinder Dogecoin’s performance. On the other hand, some retail outlets recently started accepting it as payment, and the fact that it receives a lot of support from Musk creates more confidence in the market.

Musk also announced a space mission which he has called Doge1 through his other company, SpaceX. He also revealed that the payload for the mission will be paid for in Dogecoin. Many see this as a huge win for Dogecoin and they expect it to be the catalyst necessary to prove to the world that it is a fully-fledged cryptocurrency that can be used for regular transactions. However, Dogecoin will need more than that to gain and maintain more value in the future. It is not as scarce as Bitcoin and meme status might not be enough to keep people interested.