If you have been watching the cryptocurrency market for some time, you may have noticed that it tends to turn bearish during the weekend. Top cryptocurrencies such as Bitcoin are currently experiencing significant price dips and this is no coincidence.

The performance might be influenced by a variety of factors including withdrawals for weekend spending, and whale movement. Here’s a look at how some of the most popular coins have performed in the last few days. 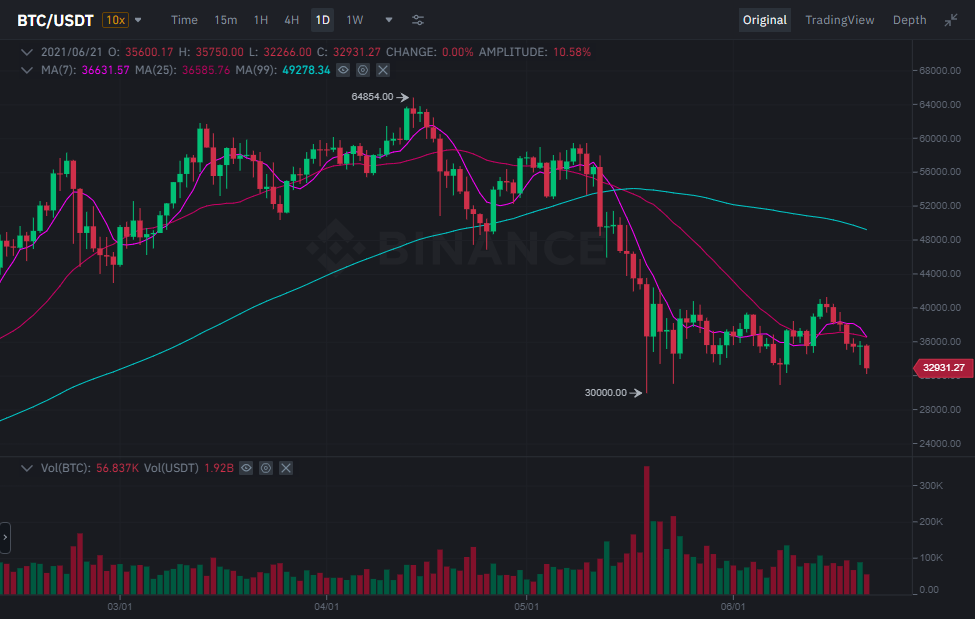 Bitcoin has performed dismally in the last few days and its current bearish performance is courtesy of China’s intensified crackdown on Bitcoin mining, as well as the U.S dollar’s rising value. If its price continues on the downward trend, it should experience support near the $31,100 price level. Some market correction is bound to happen considering that the price has been in free fall since Monday last week after peaking at $40,144 on Monday last week. 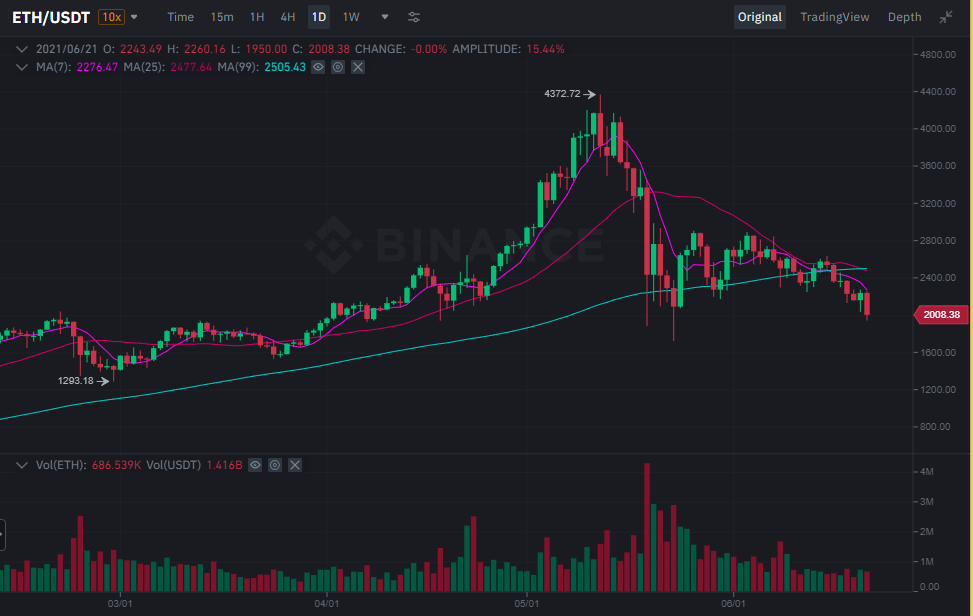 Ether’s current downturn had it briefly drop below $2,000 as the selling pressure increased. If the price maintains its downward momentum, it should encounter some support around the $1,900 price level which has acted as support and resistance in the past. The current performance indicates substantial selling volume which is backed by the fact that the price is currently trading under its 7-day, 25-day, and 99-day moving averages.

XRP has been in free-fall this week as uncertainty continued looming over the Ripple vs SEC legal battle. XRP tanked by 6.58% in the last 24 hours and 21.64% in the last 7 days making it one of the biggest losers in the crypto market. It is currently trading at $0.6997. 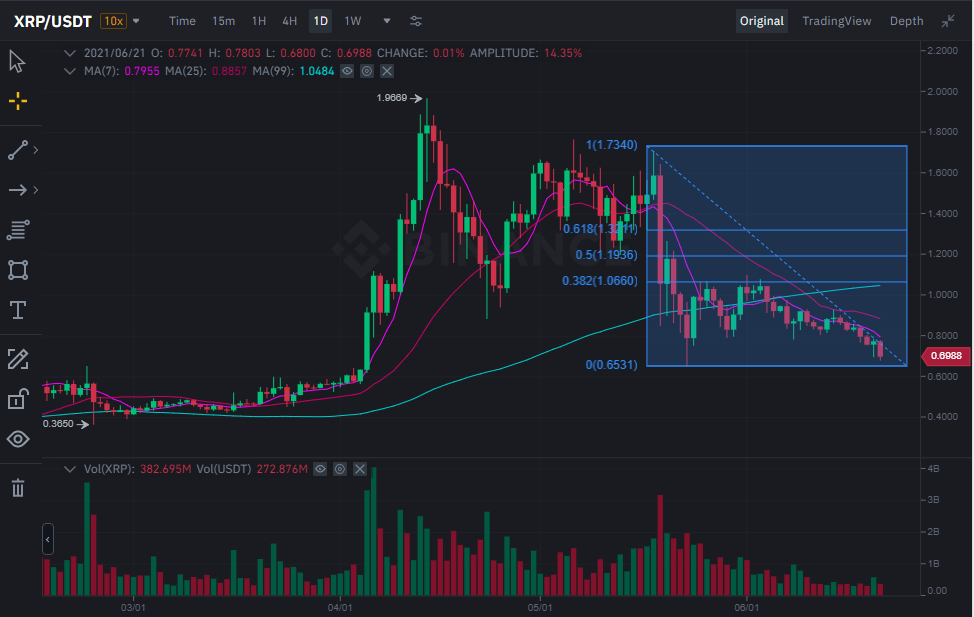 XRP’s trading volume has been steadily declining indicating less interest by traders on account of the uncertainty around the ongoing legal battle. This uncertainty also makes the price more sensitive to negative news. For example, it extended its dip after SEC Commissioner Hester Peirce noted that the SEC considers crypto assets as securities even if they are not categorized as such, as long as they were sold as a security. This statement may have fueled further FUD for XRP, leading to additional decline. 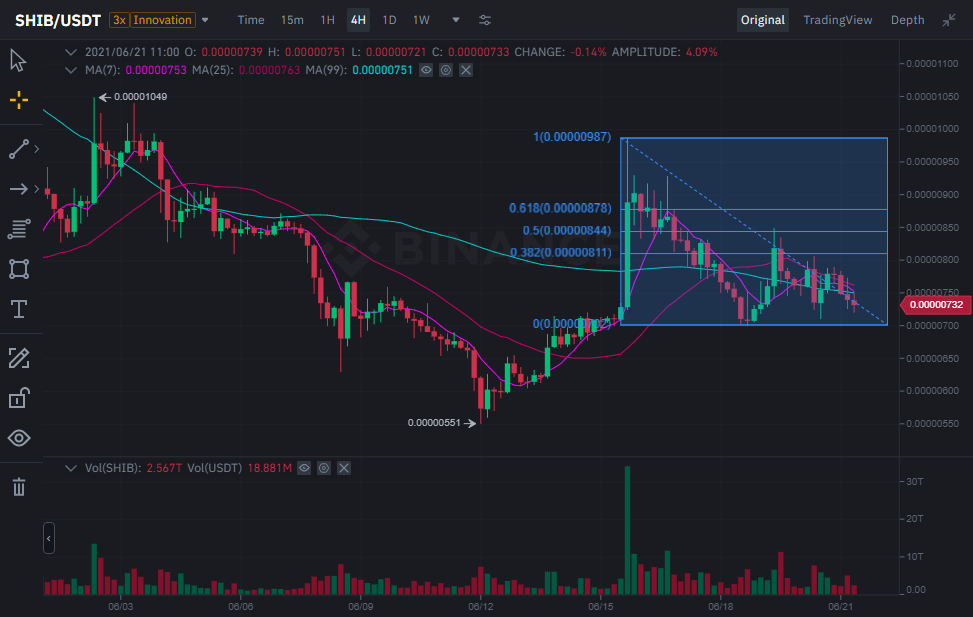 Shiba Inu is currently one of the coins that have been receiving a lot of attention thanks to its rapidly growing community and development goals. Its performance is up in the last 7 days thanks to the expectations of a Coinbase Pro listing. However, some of its gains were eroded after Coinbase announced some technical difficulties in listing but plans to launch are still in play. Selling volume has decreased in the last 24 hours as more traders are willing to sell at the currently discounted price. The price is bound to gain support at $0.00000700. It also has some upside potential once Coinbase Pro finally lists the coin and also the upcoming Shibaswap DEX launch.

The current market swings have become the norm for the market, which means that there will soon be some upward movement as weekly trading kicks in. When the bears will finally take over is still up for debate, but for now, there are no clear signals, especially as the Chinese authorities keep springing surprises.