Bitcoin Bounces Back Above $40,000 Amid Expectations Of A Continued Decline

The cryptocurrency market has been extra volatile in the last few days during which bears have been dominant. Bitcoin has been leading the downward charge and as a result, the global crypto market cap has dipped below $2 trillion.

Bitcoin’s market cap currently stands at $812 billion, and it is currently trading at $42,408 which represents a significant recovery from yesterday’s low of $39,665. The last time that Bitcoin traded that low was in the first week of August this year. Bitcoin is down by 1.94% in the last 24 hours at the time of this press and by 10% in the last 7 days. 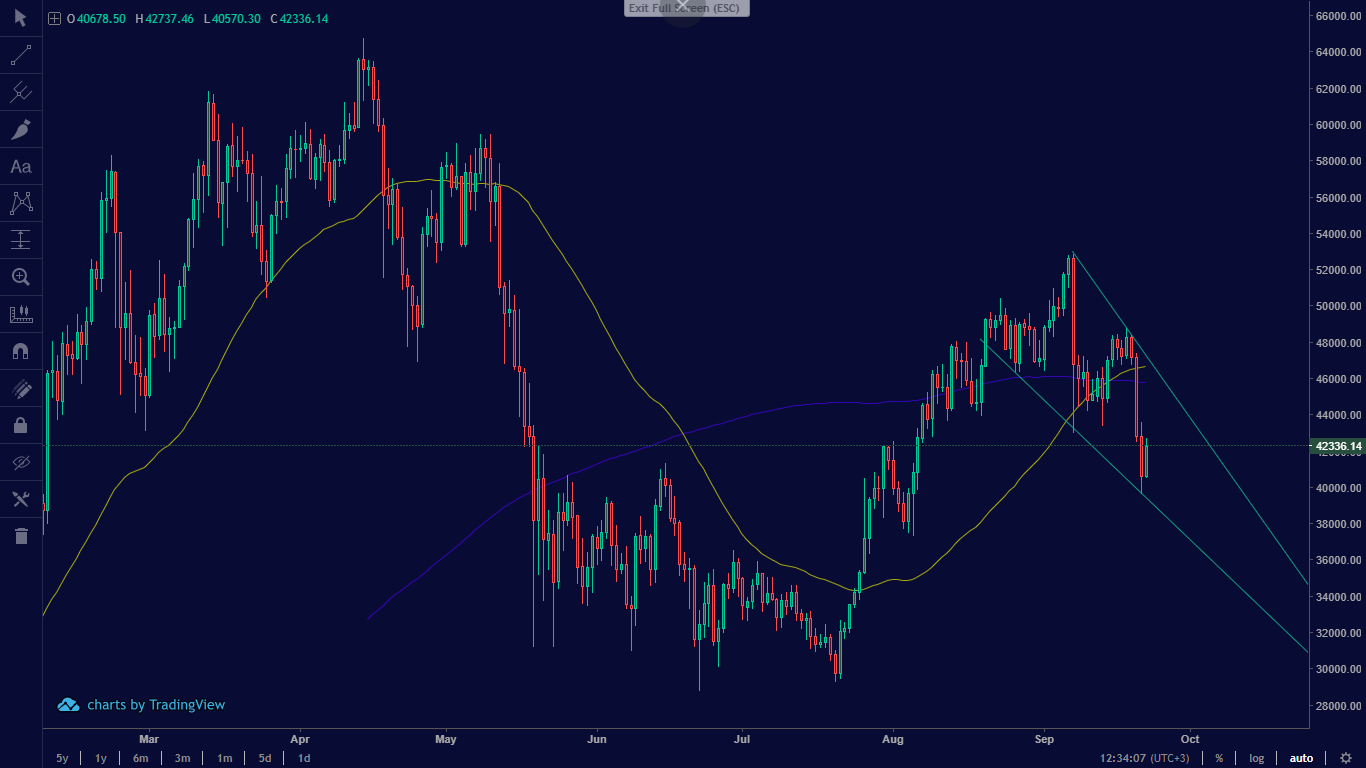 Bitcoin achieved some minor gains after forming the golden cross but then its price action turned heavily bearish, contrary to retail market expectations. The long bearish candles representing the dip yesterday and the previous day highlight potential whale action but more interesting is the fact that the price has been respecting the trend lines indicated above.

The indicators suggest that there might be a continued downward spiral, in which case the price would likely drop to around $37,000. A retest of that price level would indicate a good entry point. However, the highly volatile and unpredictable nature of the market means we should not rule out a potential reversal. Bitcoin's latest price action has gone against the expectations of the retail market, and thus the expectations of more upside might also be shattered by an unexpected downward movement.

The impact of market forces and regulation

The SEC’s chairman Gary Gensler recently confirmed collaborative crypto regulation efforts with Congress but the real question is how this will affect Bitcoin. Regulators plan to approach the crypto market through stablecoin regulation, as well as the regulation of crypto exchanges and companies that deal with crypto. Although these measures might not have a direct impact on Bitcoin because it is decentralized, they may trigger more FUD and concern in the market, leading to more selloffs for the market.

Recovery would not take long since Bitcoin is the equivalent of digital gold and demand has been on an upward trajectory. For example, institutional interest in cryptocurrencies has increased significantly this year, forcing many crypto investment companies to push for regulatory approval of Bitcoin ETFs. The approval of Bitcoin ETFs would be considered a white swan event because they would open the door for more Bitcoin acquisition by institutional buyers, thus fueling more demand. In such cases, the demand would have an actual impact on the price of BTC because the ETFs would be backed by Bitcoin.

There are other events in the market to look out for, such as bond-buying by the Federal Reserve. If the FED’s bond-buying tapers off, then it would signify a return of more strength to the dollar and subsequently more confidence in the economy. Investors would thus move their money from crypto to other investments such as stocks, thus leading to more downside for Bitcoin and other cryptocurrencies. On the other hand, more countries are embracing Bitcoin as legal tender, thus paving the way for more demand for the cryptocurrency.

Bitcoin’s performance in September has historically been dominated by bearishness and that seems to be the case this year. The market sentiment has switched in favor of fear but that is when the big fish often buy, suggesting that a potentially strong reversal might occur soon.