ADA Shows Signs Of Recovery As Cardano Summit Draws Near

Cardano is currently one of the most promising blockchain projects and it recently went through a major upgrade with the introduction of smart contracts. However, the upgrade did not reflect on the price of ADA contrary to expectations.

ADA traded at $2.23 at the time of this press, which represents a 5.23% gain in the last 24 hours. However, it is still down by 9.86% in the last 7 days as a result of the bearishness that has prevailed this month. ADA traded as high as $3.10 on September 2 before the bears took over, sending its price crashing as low as $1.91 earlier this week. It did register a significant rally on September 11, a day before the smart contract launch but the bears were back in control by the next day. 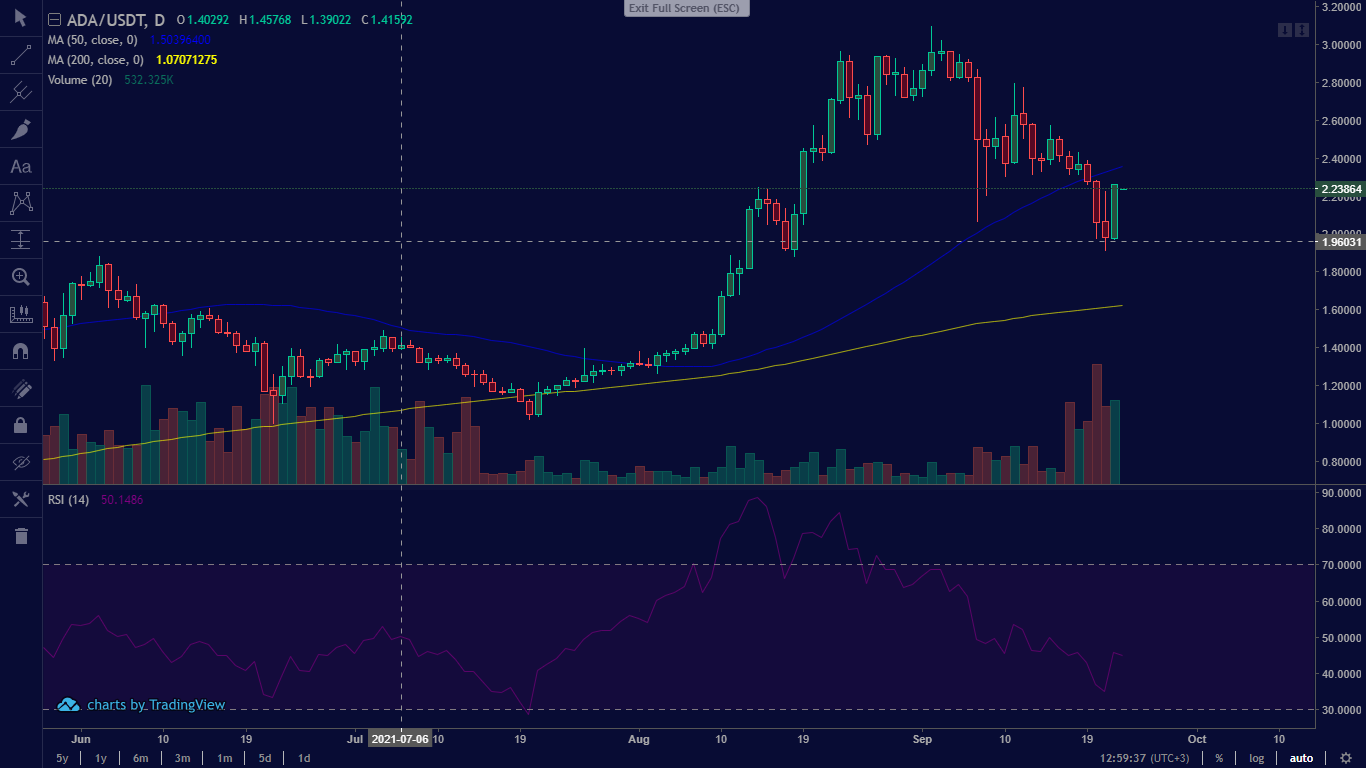 ADA’s significant uptick in the last 24 hours reflects the uptick in the overall global crypto market cap which is up by 5.83%. On the technical side of things, ADA’s price action seems to be making its way back above the 50-day moving average, which would suggest some strong bullishness ahead. Meanwhile, the RSI indicator has bounced back from the oversold zone, reflecting today’s bullishness steering towards recovery.

Are the bulls really back or is it a temporary recovery before a continued crash?

There is a lot of uncertainty in the market especially with the latest events such as the ongoing real estate crash in China and the regulatory fears looming over the crypto market. They might negatively impact the price of ADA and other cryptocurrencies’ performance this month. September has historically delivered a bearish performance but October is expected to bring good tidings.

Numerous factors may support continued recovery. For example, the Cardano Summit will take place on September 25, and Cardano’s executives are expected to release details about the projects being built on the network. Favorable announcements will undoubtedly have a positive impact on ADA's growth especially in the long term but it will likely also trigger a substantial uptick in the short term. This is because of investor FOMO-ing in at discounted prices before ADA’s price goes up.

An influx of projects developing on Cardano is a good sign for the network because it will facilitate organic demand for the Cardano token. The previous lack of smart contract support was a bottleneck that prevented ADA from unlocking its true potential. The cryptocurrency should register strong growth in the next few months now that the missing ingredient has been added.

A return of bullishness in the cryptocurrency market will be good for ADA especially in Q4 2021 because it coincides with the period of rapid onboarding of decentralized projects on the Cardano network. If that will be the case for the remaining part of 2021, then ADA bulls will have an easier time rallying. However, the volatile and uncertain nature of the market means it is not a guarantee, and some black swan events between now and the end of the year would likely change the outcome. Fortunately, Cardano’s long-term outlook still favors strong performance for ADA.