What Is Going On With Cardano And Will ADA Eventually Lift-Off?

The cryptocurrency bulls are back as evident by the bullish rally in most of the top cryptocurrencies but they seem to be discriminating against some digital currencies such as Cardano’s ADA.

To understand just how bullish the market currently is, the global crypto market cap is up by 1.54% in the last 24 hours and currently rests at $2.20 trillion. This is a significant improvement considering that it was below $2 trillion a few days ago. Bitcoin, which is leading the charge has recovered from sub-$43,000 price levels to above $51,000 while Cardano struggles to break resistance above $2.25.

ADA’s performance has been so underwhelming that it has tanked by 3.37% in the last 24 hours and is currently trading at $2.14. The cryptocurrency has been in a descending price pattern ever since it reached an all-time high of $3.10 early last month and it was overall bearish in September. However, the price has also formed a wedge pattern which suggests that a breakout might take place anytime now. 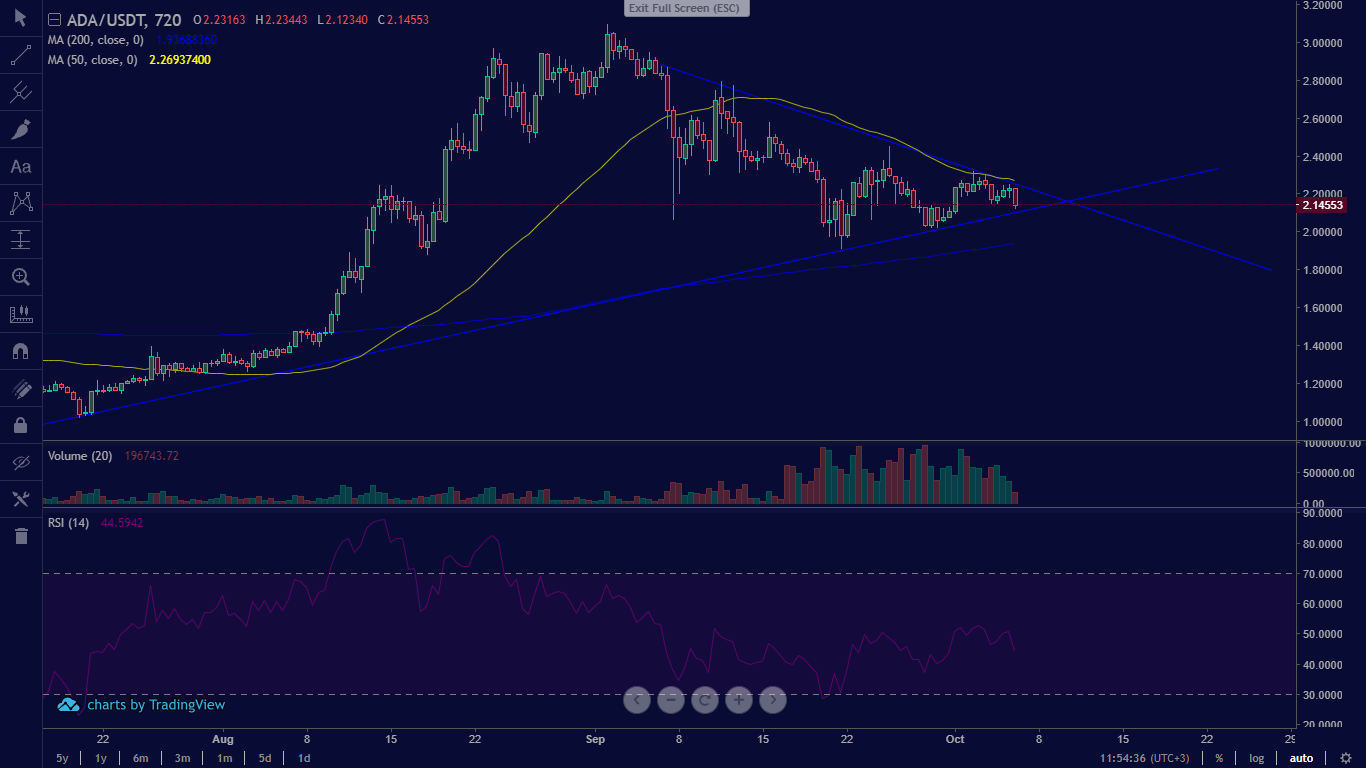 ADA is currently in the lower range of its RSI indicator although it is not yet in the oversold zone. It is also trading above its 200-day moving average, which means the macro trend is still bullish. Meanwhile, the volume indicator highlights some selloffs today although the selling volume has so far been low.

Is ADA preparing for a breakout?

Most of the top cryptocurrencies have already enjoyed a significant rally during the October bull run (Uptober) but ADA’s price remains subdued. However, both the technicals and fundamentals support the idea that the price might be in breakout territory. The Cardano summit recently highlighted some of Cardano’s developments which will undoubtedly pave the way for more organic growth for the network and this will subsequently have a positive impact on the price of ADA in the future.

Furthermore, ADA’s current wedge shape pattern suggests the likelihood of a breakout favoring its upside. This is because many investors are aware that ADA has not had a chance to experience a rally during the latest bull run, and as such, it is viewed as undervalued, particularly taking into account the network’s current growth trajectory.

Even major investment funds believe that ADA is undervalued. Crypto investment firm Grayscale recently released a report through which it stated that Cardano is undervalued compared to its main rival especially from a fundamental point of view. Cardano is currently kicking things into high gear in terms of projects being developed on its blockchain.

Cardano’s founders and development team have taken their time to ensure that the blockchain runs smoothly and that the network has a more user-friendly approach that will be favorable for long-term growth. Cheaper transaction fees, smart contracts, and robust NFT support, as well as upcoming DEXes will be among the main growth drivers. These factors should, in theory, contribute to more investor confidence and align with the expectations of a strong performance for the cryptocurrency.

Another scenario that sets up Cardano for some upside is the fact that profiting taking will happen on some of the cryptocurrencies that have been heavily bullish this week. Investors will be looking for undervalued cryptocurrencies through which they can leverage another bull run and ADA is a prime candidate.