Crypto Market Recap: Bitcoin Leads Another Bullish Wave but Will There be a New ATH?

The cryptocurrency market is off to another exciting week characterized by bullishness especially by Bitcoin but altcoins are receiving a lot of attention too lately because BTC dominance has been declining. This suggests that investors are also investing heavily in some of the top or most promising altcoins. This reflects the gains that some of the top cryptocurrencies have delivered during the weekend and that momentum seems to be continuing today. Here is a recap of how some of those coins are performing.

BTC is off to a bullish start this week, extending its gains during the weekend after delivering a ranging performance last week. It traded at $65,906 at the time of this press after rallying by 6.32% in the last 24 hours. Bitcoin appears to be pushing towards its all-time high which aligns with the expectations that it will continue to rally towards the end of the year and possibly reach a $100,000 price tag. There is still ample time for such gains but they would have to be supported by robust demand, although that might not necessarily be the expected outlook. 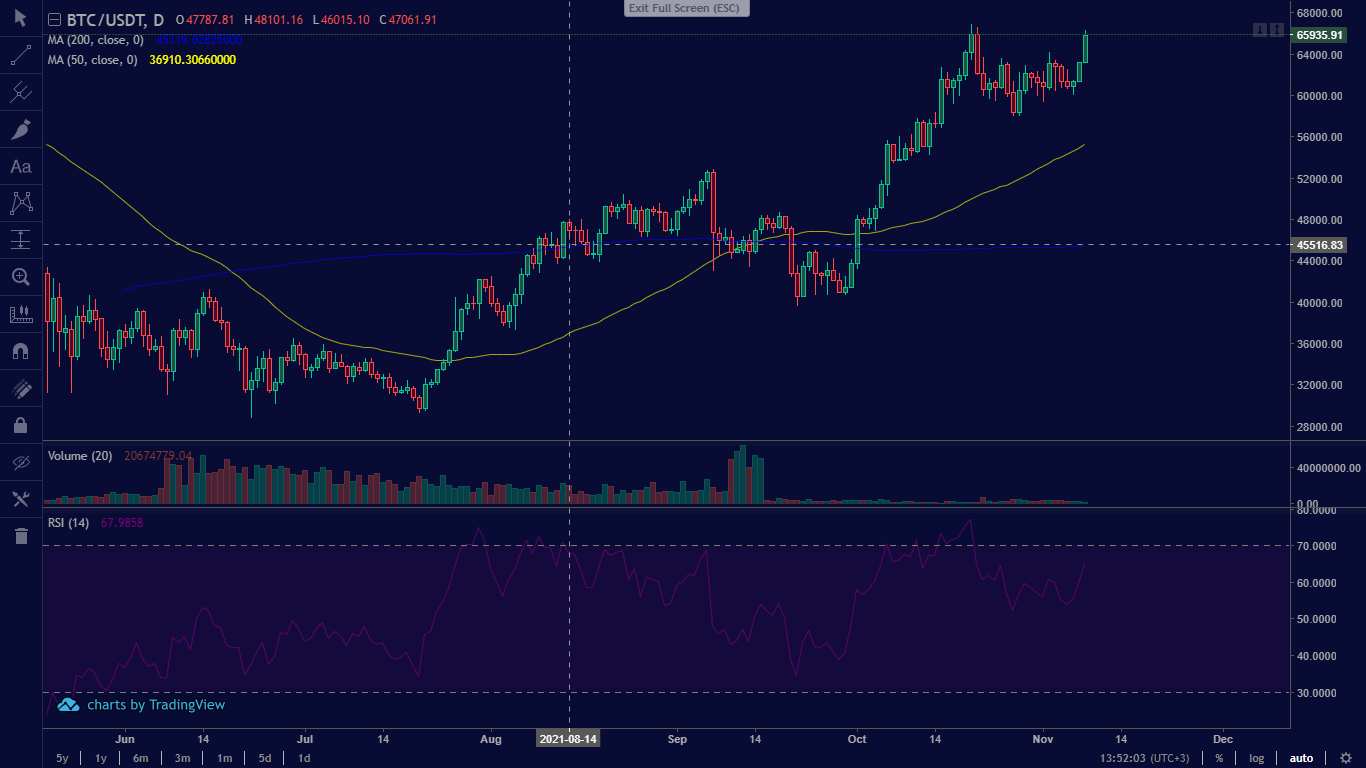 On the technical side of things, BTC is still trading healthily above its moving averages but its price action is getting overextended compared to the MA. Its 200-day moving average is flattening out, suggesting that the longer-term bullish momentum might be weakening but the RSI suggests there is still some more potential upside.

ETH’s performance today has been so exciting because it managed to set a new all-time high at $4,764. It has since retraced slightly and is currently trading at $4,735 which represents a 2.68% gain in the last 24 hours at the time of writing.  ETH has enjoyed an impressive rally in the last few days after favorable Goldman Sachs sentiments, which suggest that it can potentially rally to $8,000 within the next two months. 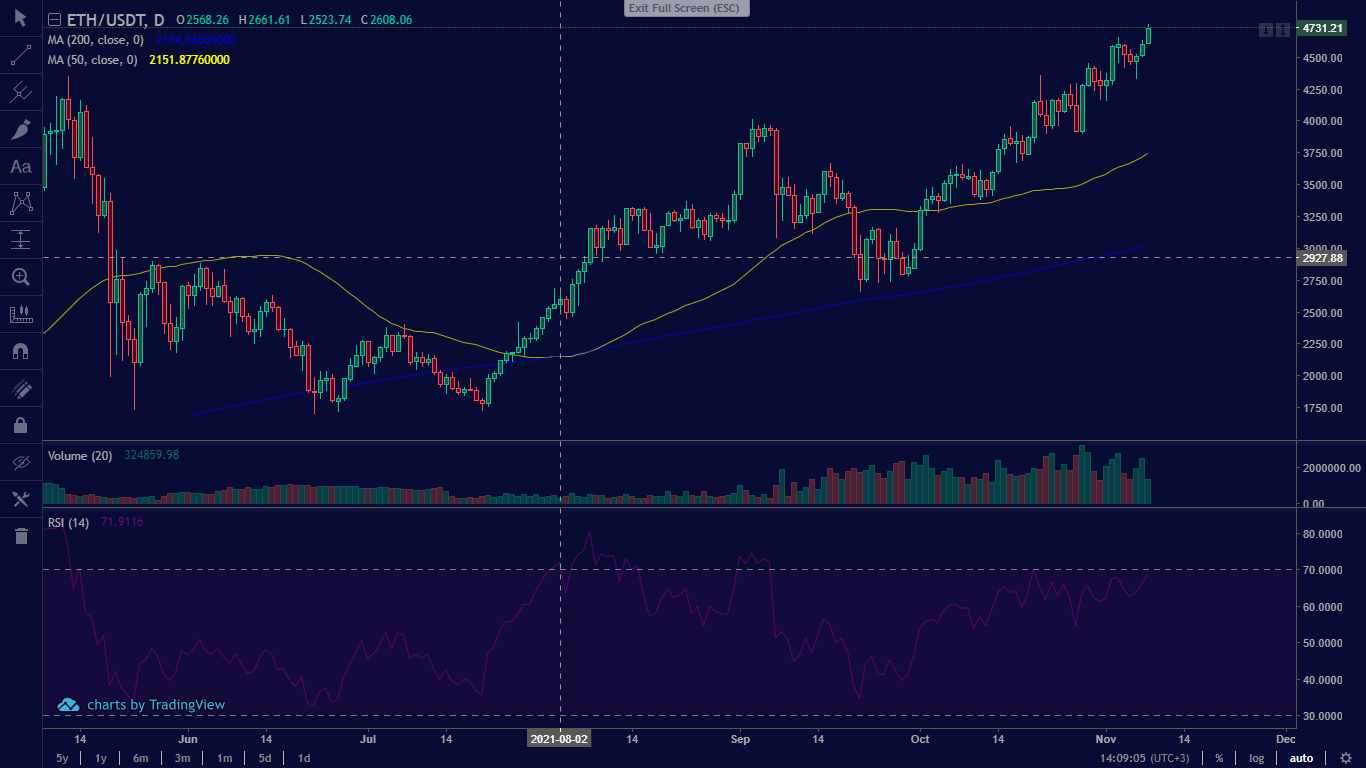 ETH has so far registered an impressive bullish rally since the start of October and this means there might be a significant price correction up ahead. It is currently closing in on the overbought zone according to the RSI and it is significantly extended from its 50-day and 200-day moving averages.

Cardano’s ADA has been one of the most underwhelming cryptocurrencies in the top 50. Its bears seem to be dominating judging by the significant price drops every time BTC is bearish but smaller recoveries when BTC is bullish. ADA is currently trading at $2.03 after recovering from sub-$2 prices, after rising by 1.99% in the last 24 hours. 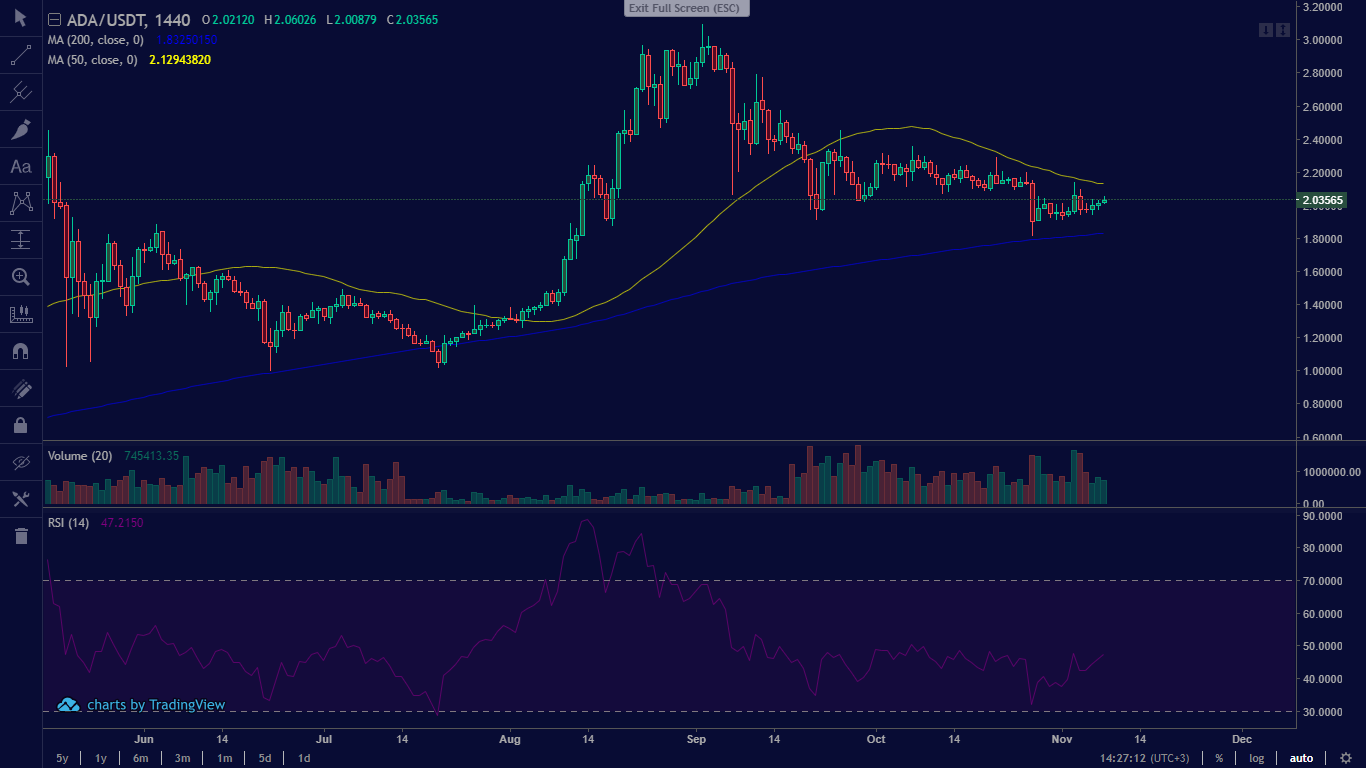 ADA’s relative underperformance also makes it one of the most undervalued cryptocurrencies from a technical and fundamental point of view. It is trading above the 200-day moving average which highlights long-term bullish momentum but it is still below the 50-day MA. Its RSI suggests room for a strong bullish uptick. The Cardano blockchain is currently in a period of strong growth and development which will undoubtedly play into ADA’s price action in the future.