Cardano’s native cryptocurrency ADA is finally showing some bullish signs despite being stuck in a bearish downtrend since early September.

ADA's price action turned bullish this weekend, fueling a rally from sub-$2 price levels and eventually resulting in a parabolic run that peaked at $2.38 during Tuesday's trading session. This was the first time since September that Cardano has registered such a powerful bullish run, suggesting that it might finally be out of its bearish rut.

ADA is currently trading at $2.23 which represents a 1.5% drop in the last 24 hours, highlighting the price correction after a massive run during yesterday’s trading session. However, it is still up by 5.70% in the last 7 days. 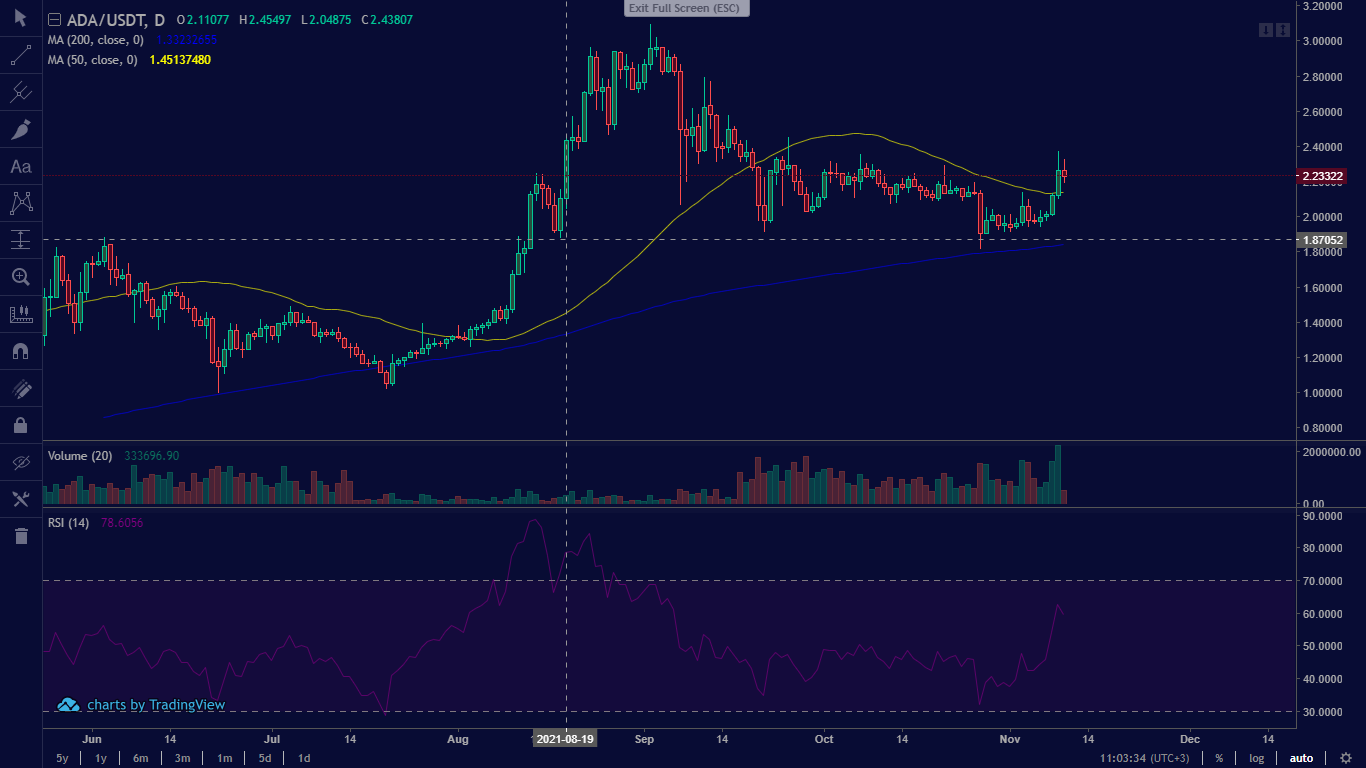 ADA’s bullish run on Tuesday reflects a substantial uptick in buying volume, perhaps indicating whale activity. If that is the case, then it means the big players are potentially preparing to ride the bulls as ADA commences its journey towards previous highs and potentially new all-time highs. The price pump also pushed ADA back above its 52-day moving average, affirming the bullish outlook. Despite the rally, it is still not oversold according to the RSI. Suggesting more potential upside.

What ADA’s correlation with BTC reveals about its current performance

Bitcoin’s dominance is often a big factor in the price action of altcoins. That is why altcoins seem to follow BTC’s price action but that is not always the case, especially for ADA since September. After peaking at around $3.10 on November 2, ADA’s price action experienced a sizable correction and so did Bitcoin in the same month. However, the big difference occurred at the end of September when BTC commenced another bullish run but ADA failed to follow a similar trajectory, seemingly unpegging itself from Bitcoin’s influence.

ADA’s performance in September was lackluster and even went down further when most of the other top cryptocurrencies were rallying. However, Bitcoin’s rally also experienced some correction towards the end of October and it is during this rally that ADA’s price seems to have regained its peg with Bitcoin. ADA's bearish performance on October 27 was a good reflection of BTC's decline on the same day. Similarly, ADA's rally in the last 3 days aligned with BTC's rally during the same period, further reinforcing the idea that ADA has aligned itself to BTC price action.

What To expect moving forward

ADA's performance is not just predicated on Bitcoin's performance. It is also influenced by the demand and supply forces. For example, the bearish price action that prevailed in the last few weeks paved way for a lot of accumulation. ADA long positions consequently created higher price floors for the cryptocurrency. This is backed by the overall market sentiment that ADA is currently undervalued, thus fueling a lot of retail buying.

ADA's notable price pump in the last few days will likely yield a positive feedback loop. FOMO might fuel more buying in the hopes of ridding the cryptocurrency's bullish recovery. Such a scenario would potentially support the expectations of another bull run for ADA in the next few weeks and if the idea of the BTC peg holds, then we might witness more upside if Bitcoin also delivers a strong performance towards the end of the year.