ETH Peaks Near $4,900: Did the Bull Market Peak, or Will it Continue Rallying?

Ethereum’s native cryptocurrency ETH has performed exceptionally not only in the last few weeks but also for the last 11 months. Of course, there have been periods of bearishness but the fact that it is currently worth over $4,700 is nothing short of impressive considering that it was worth as low as $714 at the start of 2021. It has rallied more than 500% so far this year.

ETH traded at $4,720 at the time of this press, after a 0.35% gain in the last 24 hours and a 4.72% weekly gain. It has so far retraced from yesterday's high of $4,865, reflecting the rest of the market which experienced a significant price correction in the last few hours, judging by the 1.70% drop in the global crypto market cap. 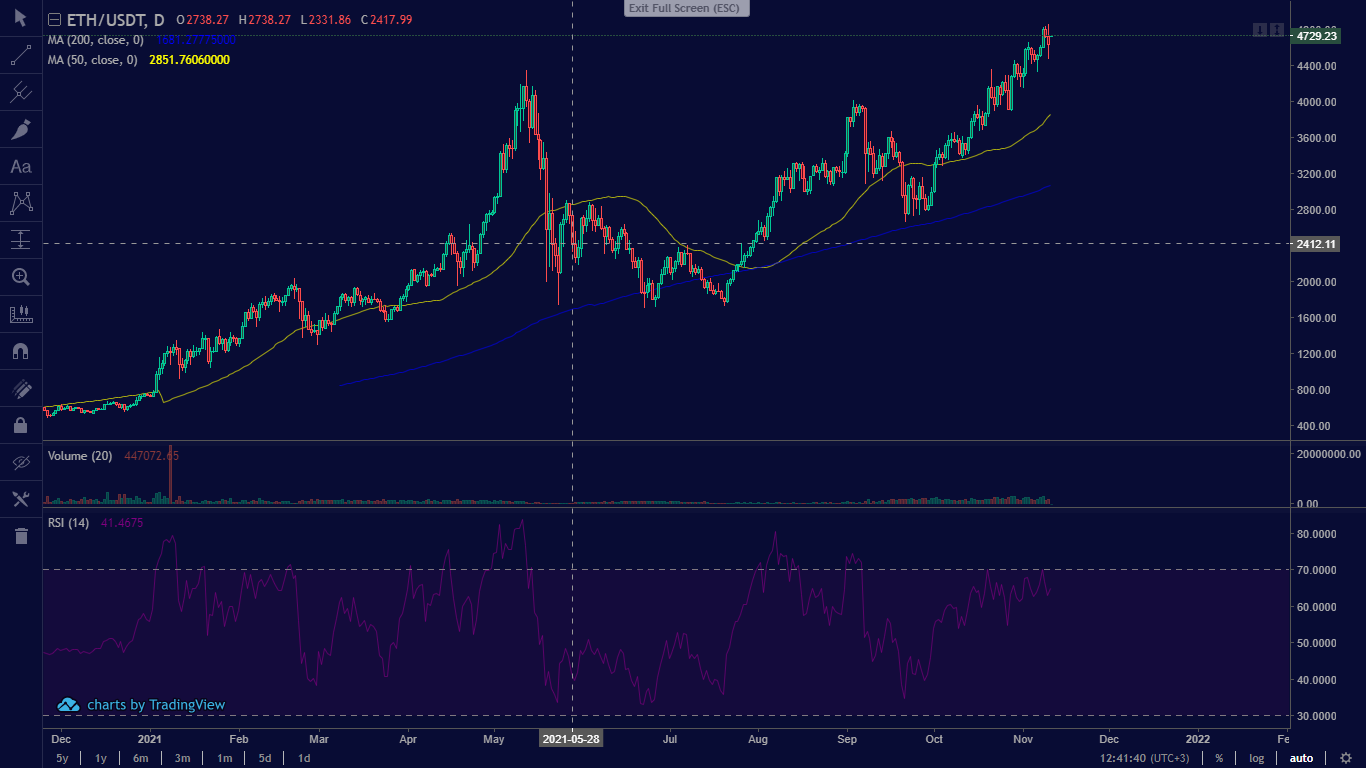 Despite its impressive bull run, ETH is still not in the overbought zone according to the RSI indicator. However, it does seem overextended above its 50-day and 200-day moving average, suggesting that any upside might soon be characterized by a significant retracement. Perhaps the last 24 hours might pave way for such a correction.

Will ETH reach the expected $8,000 price range before the end of the year?

An $8,000 ETH price is still highly probable given the rate at which ETH has been gaining value. The expectation is further supported by the strong bullish sentiments in the overall crypto market, especially for Bitcoin. Many analysts still believe in the likelihood that BTC will reach $100,000 before the end of the year and the same bullish sentiments will likely fuel a strong rally for ETH.

The market has so far demonstrated increased volatility in Q4, and that will likely continue to be the case for the remaining few weeks of the year. This means holders should brace for strong upticks and massive pullbacks. ETH’s likelihood of a continued rally is further backed by the robust utility that Ethereum has been experiencing, especially due to strong demand from the NFT market. Demand for ETH especially from the institutional segment has also been quite favorable, backed by a strong bullish outlook and FOMO.

Why you should not fear any substantial ETH price drops

Substantial price pullbacks are bound to happen every once in a while. Some ETH holders may see this as a bad thing while others may see it as an opportunity to accumulate some more. The reality is that ETH is just as important to the crypto market as Bitcoin. Another major reason is the fact that  Ethereum 2.0 will capture more value in the short-term and long term based on the implemented upgrades and the shift to proof-of-stake. This is because the upgrades solve major network limitations that have prevented Ethereum from achieving its full potential.

ETH is currently considered deflationary considering the fee burns taking place on the network. So far more than 800,000 ETH has been burnt, and this means the lower circulating supply will contribute to scarcity and potentially higher value. Note that ETH already experiences strong demand from existing projects running on the Ethereum network. More demand is expected as those projects scale up and also as the network embraces new projects. This paints a favorable picture for ETH's performance in the next few months.