Bitcoin’s Price Action: Is The Bull Run Over Or Is The Market Experiencing Another Temporary Shakedown?

Bitcoin is making headlines once again after a massive crash during yesterday's trading session which sent it below $60,000, just days after reaching an all-time high of $69,000. The bears quickly took over and undid the progress that BTC made, sending it back to price levels last seen during the start of November. It has also left many wondering whether the 2021 bull market is over.

Analyzing the cause of the bearish performance so far this week is necessary to understand whether the bulls are done for the year. The dip after the ATH was normal since a continued uptrend is not sustainable. However, the expectations that BTC would continue rallying and potentially close the year above $100,000 meant there was a lot of greed in the market, thus fueling the bullish recovery during the weekend. However, those expectations especially from the retail market and a lot of leveraged positions expecting an upside created an opportunity for institutions and whales to short BTC and altcoins.

It also seems that the trigger for the massive selloff during Tuesday’s trading session was the US Infrastructure bill containing a crypto tax clause that was recently passed into law. Meanwhile, the overleveraged positions were liquidated, leading to a bigger crash. Bitcoin dropped as low as $58490 during yesterday's dip but it has since then enjoyed some recovery and it traded at $60,466 at the time of this press. 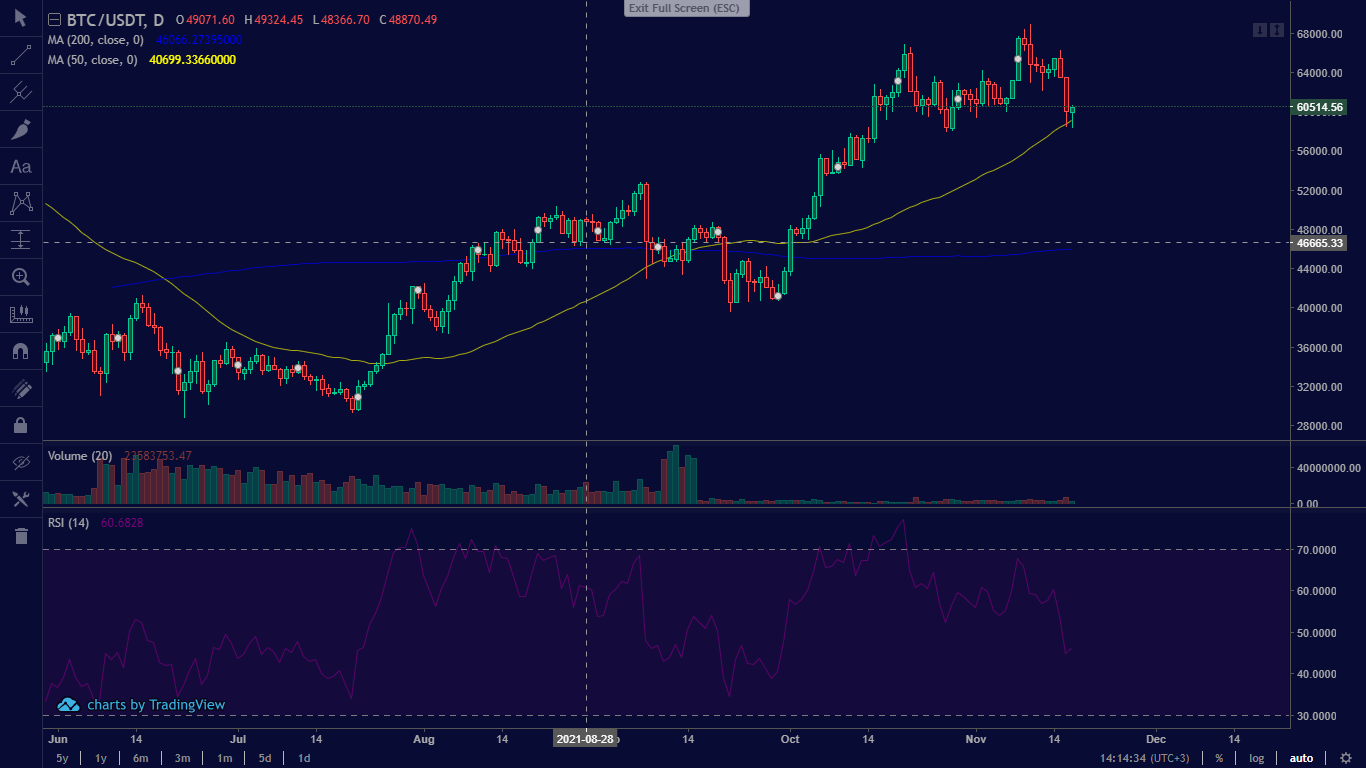 Bitcoin’s crash briefly sent it below its 50-day moving average for the first time since early October. The dip also means it is currently available at a discounted price level but despite the recent dip, it might still drop down further.

Will BTC recover and reach new highs or will it continue falling?

BTC is still not in the oversold zone according to the RSI, which means it still has potential for more downside. At this point, its price action in the next few days will be determined by the prevailing investor sentiment. The fear agreed index suggests that the current sentiment is neutral after the price drop. At this point, some FUD-inducing news might trigger more fear, leading to more selloffs. On the other hand, many believe that the current prices are a good entry point for more accumulation at discounted prices compared to previous ATHs.

Exploring external factors other than greed and fear is necessary when coming up with a price prediction. For example, rising inflation is still a concern for the economy and this makes deflationary assets such as Bitcoin and altcoins more attractive. DeFi is still developing at a rapid pace, threatening to challenge the traditional finance system. Institutional investment into crypto has increased and will likely continue to increase thanks to ETFs and other investment avenues offering exposure to the cryptocurrency market.

The above factors will highlight the potential for more crypto demand in the future, thus making a case for a long-term bullish outlook. This also means prices will go up from current levels, but it does not rule out the possibility of some more downside before another strong bull run. Investors looking to capitalize on the potential upside should thus have some cash set aside for more accumulation in case prices drop further.