ADA FUD At All-Time High After Delisting From Major Exchange: Should You Buy The Dip?

Cardano’s native cryptocurrency ADA extended its bearish downturn in the last 24 hours after it was reportedly delisted from EToro in the U.S. The event which resulted in more FUD for the Cardano community resulted in a significant selloff that further extended ADA’s decline despite it already being oversold.

ADA is currently trading at $1.65 which after a 2.52% decline in the last 24 hours at the time of this press while its weekly loss is currently at 9.30%. The recent drop sent ADA back to price levels at which it traded in August and the extended dip might have further dented investor confidence in ADA, especially since the delisting was allegedly due to regulatory concerns. 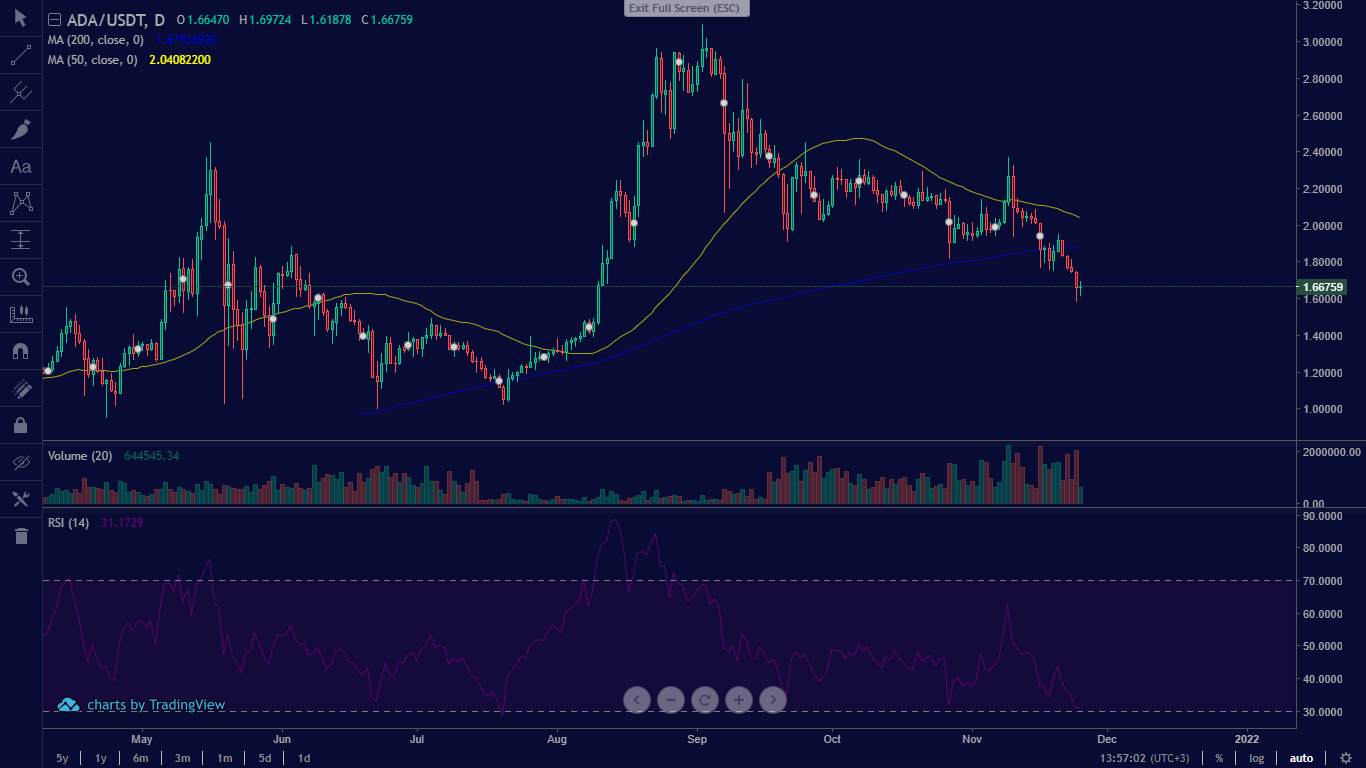 As far as ADA’s indicators are concerned, its performance in the last few days has sent it below its 200-day moving average, highlighting its extended decline. Meanwhile, its 50-day moving average is closing in on the 200-day MA and a continued decline will lead to a death cross. This might happen if the bears continue their reign in the overall crypto market. On the other hand, ADA is currently deep in the oversold zone according to the RSI indicator and the price has so far experienced some recovery.

Will ADA continue its decline?

A lower price tag for ADA compared to its current price level is not farfetched given that the crypto market is currently experiencing a bearish phase. ADA’s latest misfortunes and reduced investor confidence may also discourage investment in the coin and many of its investors might start looking for other alternative cryptocurrencies to invest in.

There is also a case for the upside now that the price of ADA is heavily discounted. The lower price tag may encourage investors to buy the recent dip in the hopes of making substantial gains when another bull run happens. This is backed by the ongoing developments in the Cardano ecosystem which will undoubtedly generate more value and utility for ADA. Savvy investors might thus see ADA’s current price levels as a good entry point for long positions.

Why has Cardano not recovered as fast as it dipped?

The exchange that delisted ADA is reportedly allowing withdrawals, which means those finding out about the delisting might still be selling, thus counteracting the buying pressure by investors taking advantage of the dip. There might also be concerns of some continued bearishness during the Thanksgiving holiday as many investors move money out of the market for some holiday spending.

There might be some marketwide bullishness after the holiday, which means the coming weekend may bring some bullish tidings. If that will be the case, then ADA might be in for a strong comeback and an entry at the current price would be favorable. Even if it continues its decline, that will only encourage more buying by those looking to take advantage of the dip. Investors exiting their positions in the affected exchange will likely access ADA through other exchanges and this might trigger a strong recovery.