Does Bitcoin’s Latest Price Pump Underscore The Start Of The Next Bullish Phase?

Bitcoin is off to a bullish start this week concluding a month that has been overall bearish after struggling to recover to pre-January crash levels. Interestingly, the price of Bitcoin jumped by more than 15% on the last day of February.  This is despite the expectations of more downside due to the FUD around the recent sanctions imposed on Russia, and the upcoming interest rate hikes by the U.S Federal Reserve. 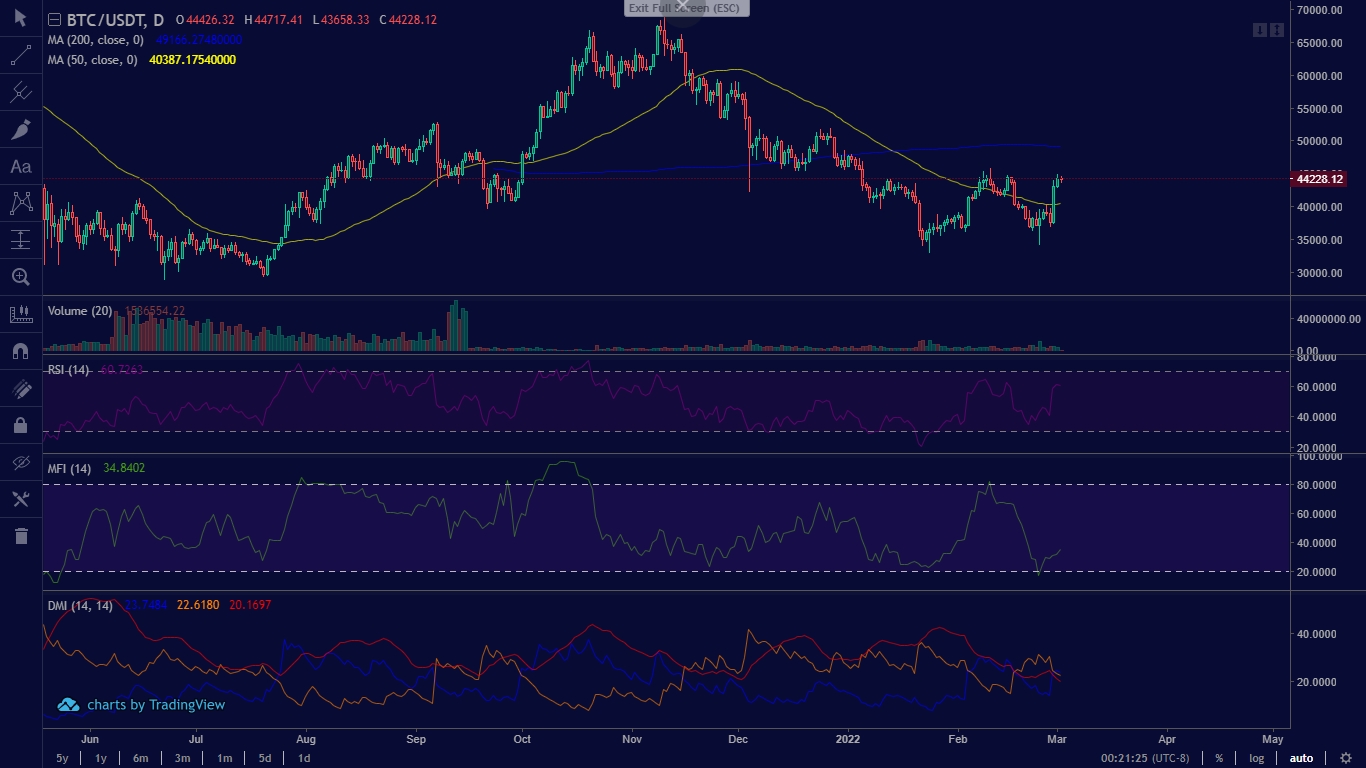 Although it has not yet been confirmed, it looks like the bottom for Bitcoin’s bear run was the lowest price level that it achieved towards the end of January. Multiple factors suggest that the bottom is already in. For instance, the bear market has been going on for 4 months from November to February.

It is unlikely that the downside will extend further before at least a 50% correction which would put the price back above $50,000. Bitcoin’s current rally has pushed the price back above its 50-day moving average, confirming the near-term bullishness and it is getting closer to the 200-day moving average indicator. A crossing from below is called a golden cross and is often considered a confirmation of a bull market, thus something to watch out for.

Although Bitcoin registered a significant decline in February, its price did not retest its January low just below $33,000. The RSI did not dip into the oversold zone in February, suggesting that there was not as much selling as was the case in the previous month. This conclusion is backed by the fact that selling volume at the height of BTC’s crash in January was higher than its selling volume in February.

The Money Flow indicator did drop below 20 in the recent February lows and this might be because there was less BTC on exchanges after the heavy accumulation during the recent lows, thus the sale of the fewer BTC was enough to achieve oversold MFI conditions. The indicator also highlights inflows or heavy accumulation in the last few days. The resulting long bullish candle on Monday might be a sign of institutional buying.

Bitcoin’s inverted head and shoulder pattern in the last few weeks can also be considered a healthy sign of macro trend reversal. The Directional Movement indicator also seems to be pointing to a higher probability of more upside for Bitcoin in the next few weeks. The Directional Movement Indicator paints a similar picture. Its +DI line recently crossed above its ADX and –DI lines from below after significant divergence between those lines in the last few days. Such a crossing often happens when the price is bullish and the icing on the proverbial cake is that it aligns with the recent lows in the RSI and MFI indicators.

In summary, we might be on the cusp of another major bull run, but there will be some bearish weeks along the way.  For example, the current bull run is approaching a critical support zone near the $45,500 price level. Previous support zones can become a resistance zone and in such a situation, Bitcoin would see some downward correction before proceeding to the upside.