Dogecoin may have lost the title of the top memecoin to Shiba Inu but it still has a strong community. Its 24-hour trading volume currently exceeds $500 million and its market cap is slightly above $16 billion, which means there is a lot of market activity around Dogecoin.

Although DOGE seems to have a lot going for it, its performance in the last few weeks has been heavily bearish. It achieved a high of $0.35 on Decoin ever since it was listed on the exchange in the second half of 2021 but has since then been steadily declining in value.

Dogecoin is currently trading at $0.1217 after rallying by 2.16% in the last 24 hours, but its weekly performance is down by 9.84%. Dogecoin has had multiple rally attempts along the way but the bears have prevailed. However, there is a notable observation in its price action which suggests that it might be about to register a major reversal to the upside. DOGE’s performance has formed a  descending triangle pattern and this is an important observation because such a pattern is often considered a bullish sign. 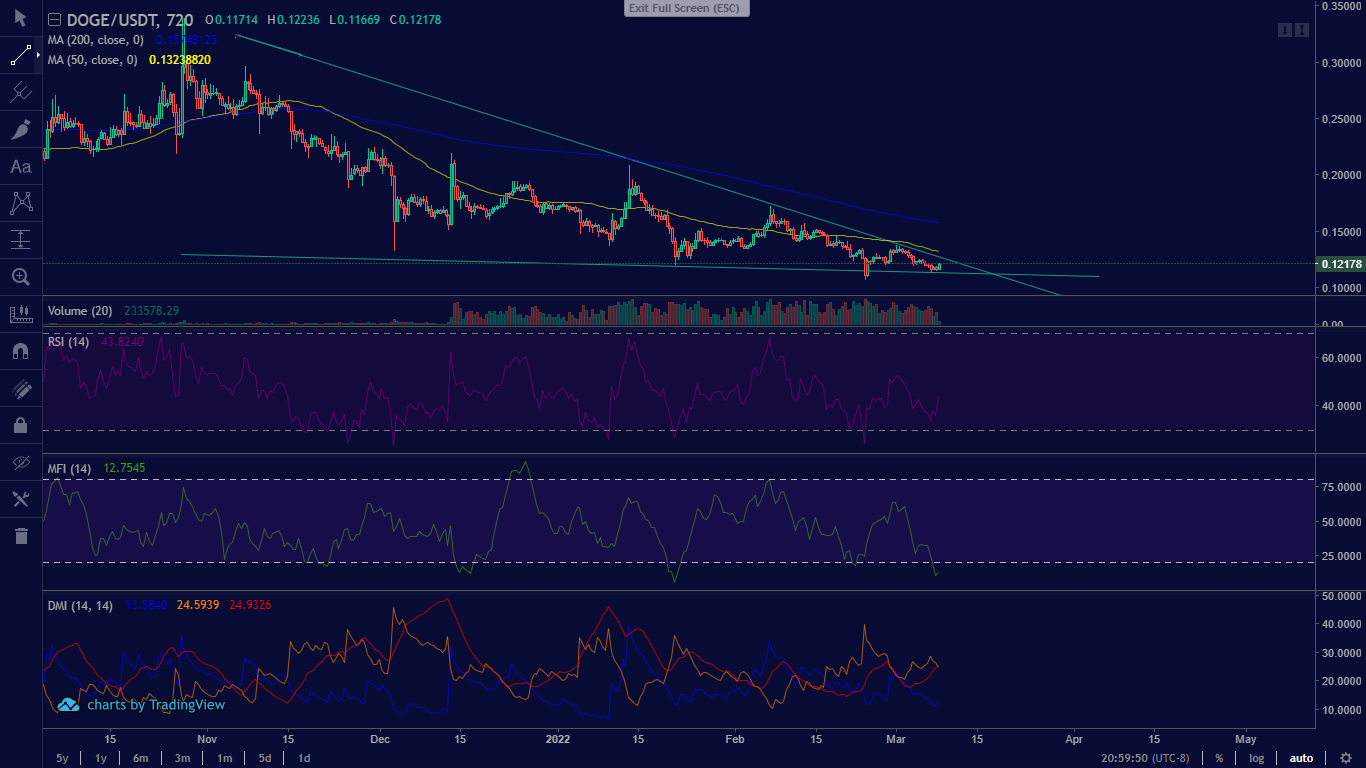 Dogecoin is still not in the oversold zone according to the RSI but the recent dip did push it down some more. Meanwhile, the Money Flow indicator highlights inflows in the last few days after the previous week’s lows. The Directional Movement Indicator is already forming bullish divergence, thus adding to the list of indicators and patterns pointing towards the likelihood of a bullish reversal.

Can Dogecoin deliver a 50% gain in the next uptick?

A 50% gain from Dogecoin’s current price would push it above $0.18. Such moves happen every once in a while in the cryptocurrency market, especially to the least expected cryptocurrencies. Dogecoin fits the bill especially now that it is not the dominant memecoin and has been on a strong losing streak for the last few months.

Crypto whales have a track record of buying the least expected coins especially when they have not shown any bullish activity for a while. Dogecoin is the 13th largest cryptocurrency by market cap and its strong community makes it a healthy target for a major price correction. However, it will only manage to deliver a 50% gain in the near term if the whales accumulate DOGE at the current low prices. This is because whales have the financial muscle to buy enough DOGE to trigger a noteworthy change in its price since it is a large-cap coin.

Another driver for a major uptick would be a wave of bullishness in the overall cryptocurrency market. It is difficult for a cryptocurrency like Dogecoin to rally while the rest of the market is bearish and this is especially the case for meme coins since they lack enough use-cases to drive demand. Bullish market conditions would certainly make it easier for DOGE to execute a massive uptick.