DOT Consolidates Below $17 As Selling Pressure Tappers, What Does It Mean For Its Price Action?

Polkadot’s native cryptocurrency DOT has struggled to rally back above its $20s in the last few weeks as fear and uncertainty continue to fuel bearish market conditions. However, DOT's latest performance suggests that its short-term outlook might be about to improve, and here's why. 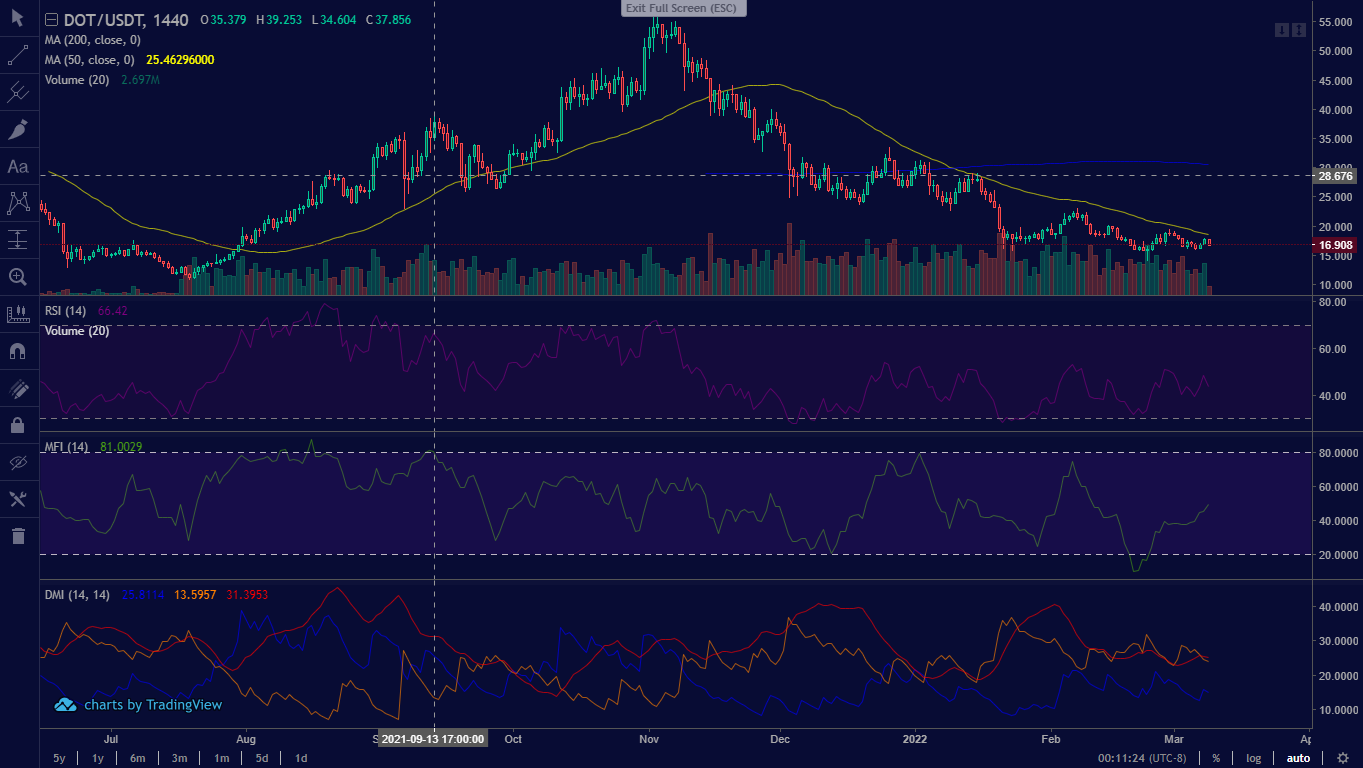 Although DOT’s performance has been bearish in the last 24 hours, its chart and indicators highlight the possibility of more upside in the next few days. Its money flow Indicator highlights inflows especially as it approaches key structural support around the $16 price level. Buying volume in the last few days has also outweighed the latest selling volume. For example, DOT’s buying volume during yesterday’s trading session WAS $2.41 million in Decoin, and selling volume is currently dominating but significantly lower at $690,000.

The current selling pressure reflects profit-taking after the gains that DOT has achieved in the last two days. The inflows highlight increased accumulation at the lower prices and this is perhaps why the RSI has consistently stayed above 40. The price action has also registered higher lows compared to its performance in February and is now getting closer to the 50-day moving average. A crossing from below would confirm the increasingly bullish conditions.

DOT’s short-term price action seems to be heavily driven by the forces affecting the global cryptocurrency market cap. So far it seems highly correlated with Bitcoin and with the securities market due to the risk-on characteristics associated with these markets. Consequently, the state of the crypto market has for the last few weeks been dictated by economic factors driving investor sentiments, hence, the bearish performance.

If DOT’s long-term performance is measured by demand and supply, then the level of demand coming from the Polkadot ecosystem should increase drastically based on the onboarding of more projects. Polkadot is currently running parachain auctions which will bring massive growth and value to the ecosystem. It is also shaping up to be one of the fastest-growing DeFi-centric blockchain networks and this will help it secure a stronger footing in the industry and compete more effectively.

On the other side of the spectrum, Polkadot has received heavy criticism for declining prices of its projects such as Moonbeam which has been on a steady decline since its launch. However, the price-performance is a reflection of prevailing bearish conditions across the board. DOT is expected to deliver a strong performance in the next bull run especially now that it has more projects adding value to its network compared to how it was in 2021.

While some investors have expressed fear with regards to DOT’s bearish price performance, it is important to note that the cryptocurrency markets often go through volatile cycles. Major economic events could still push DOT’s price further down but this does not necessarily spell doom for investors. Once market conditions improve, DOT might be among the cryptocurrencies strategically positioned to achieve robust growth.