Litecoin recently went through one of its most anticipated upgrades called MimbleWimble. A few days later, Litecoin’s official Twitter handle reported a 21% increase in social engagement.  While the observation means conversations around the cryptocurrency have increased, the real question is whether it can contribute to LTC’s value.

The most notable thing about the MimbleWimble upgrade is that it enables opt-in privacy. This means LTC holders can activate privacy features on the cryptocurrency if they wish, or they can continue using it as a regular cryptocurrency that can easily be tracked on-chain.

The Mimbleimble upgrade sparked an increase in social engagement because it represents a new use case for Litecoin as a privacy coin. Such a utility might contribute to its long-term value driven by demand from users who prefer to transact privately. The privacy coin segment has seen increased growth in the last few years as the market, and Litecoin is looking to be part of that growth.

Despite the upgrade and the boost in social engagement, Litecoin’s price action remained relatively flat. LTC traded at $68.99 at the time of writing, after a 1.13% drop in the last 24 hours. It also dropped by 1.85% in the last 7 days. 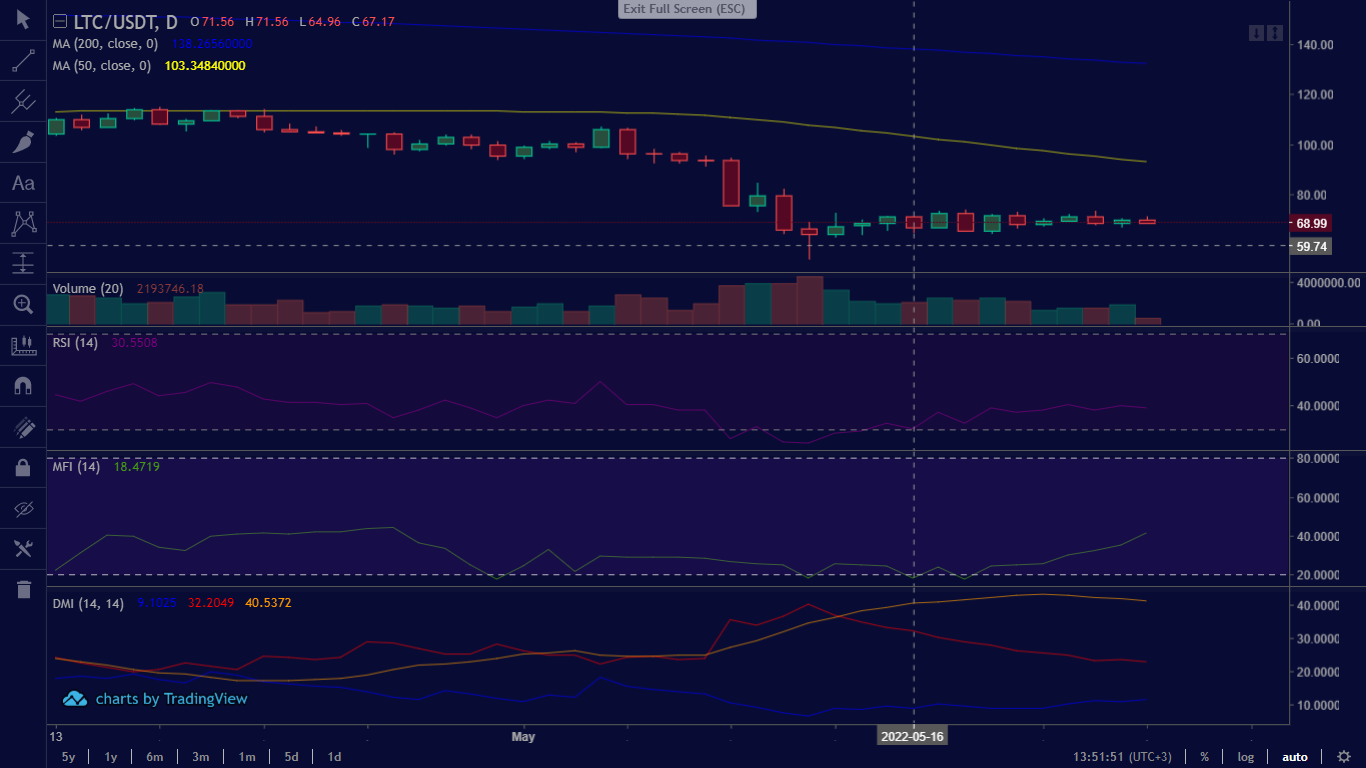 Litecoin’s Money Flow indicator reveals that it has so far achieved significant accumulation in the last two weeks. This aided its bounceback from the oversold zone as currently indicated by the RSI but the price action has been relatively weak despite recovery according to the indicators. For example, it has been stuck within a tight range (between $61 and $64) for the last two weeks.

The directional movement indicator (DMI) currently highlights the lack of directional momentum which reflects LTC’s price action in the last 2 weeks. The flat price action continues to extend but it also suggests that pressure for a breakout is building up.

What to expect from LTC moving forward

MimbleWimble upgrade might play a significant contribution to Litecoin’s attractiveness in the long term. For now, it looks like the news did not have much of an impact on its price action. LTC's currently subdued price action reflects the overall conditions in the crypto market. A cloud of uncertainty is currently looming over the securities and crypto markets as governments implement measures to fight inflation and economic downturn.

Meanwhile, Litecoin is currently heavily oversold from a historic price perspective. It traded as high as $412 in May last year, which means that its current price tag represents a heavy discount of more than 80%. The healthy discount means it is still trading at an attractive entry point ideal for long-term hodlers. However, there is still a significant risk of more downside if the state of the global economy worsens in the next few weeks.

A negative outcome in the market could see investors take more precautions, hence securities and stocks may experience more downside. Such an outcome would be ideal for a dollar-cost-average strategy and would present better price entry points. However, it is also likely that the market is currently at its bottom, in which case a bullish breakout would yield some upside for Litecoin.