ETH just concluded May with some bullish activity in a month in which its performance was relatively neutered. June might bring with it good tidings as Ethereum draws closer to its Ethereum 2.0 merge which has been in the works for a long time. Ethereum just released the Ropsten update which provides an overview of what to expect moving forward.

Will the upgrade have an impact on ETH’s price action?

The upgrade will not have a direct impact on the price of ETH. However, it does highlight the progress that the merge activities have achieved so far and this may provide some clarity about the merge timeline. Investors may find ETH more attractive as the merge draws near, for staking and earning passive income.

ETH traded at $1,933 at press time after a 1.69% drop in the last 24 hours and 2.02% in the last 7 days. It achieved a bullish recovery during the weekend after a bearish performance towards the end of last week when it dropped as low as $1,704. It seems its rally was not strong enough to push it out of its narrow range where it has been stuck since the second week of May. 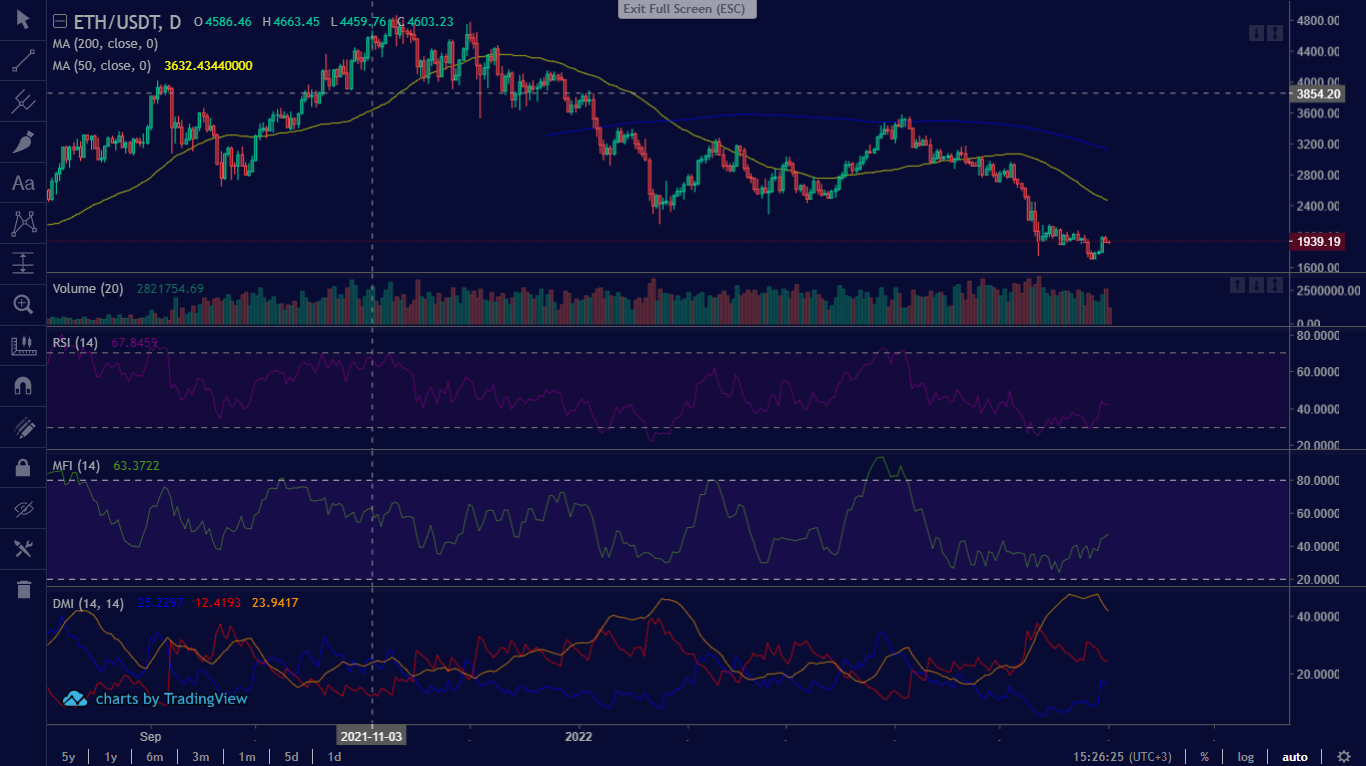 Although ETH's price tag remains subdued below $2,000, its MFI highlights significant accumulation since May 20. However, that did not reflect in its price action, suggesting that the accumulation may have mostly been a sign of retail and not whale activity.

The RSI registered a notable uptick in the last few days but it is still trading below the neutral level. Meanwhile, the MFI recorded a significant increase in bullish momentum for the first time since mid-May.

A look at ETH’s on-chain metrics from sentiment reveals that the percentage of ETH’s supply held by whales bottomed out on 21 May, after which it shows some accumulation. However, the same metric dropped slightly on 29 May, suggesting that whales sold off some of their ETH holdings after attaining some gains. This was around the same time that the market cap was increasing and it explains why ETH’S price dropped after the recent rally.

The fact that ETH’s market cap and supply held by whales have increased after May’s market crash is a good sign that it might be ready to recover. June might deliver some upside if all goes well, but this does not necessarily have to be the case. The market is still susceptible to unforeseen black swan events which might push prices down to new local lows.

On the other hand, a white swan event may trigger another massive rally which would see ETH recover above the $2,000 price level or even higher. For now, ETH is still trading at a discount, hence a good entry point for those that wish to make a long-term investment.