Is XRP still Worth holding in the second half of 2022?

If you have been keeping up with crypto-related matters, then you probably know that Ripple has been locked in a legal battle with the SEC. meanwhile, its price has been severely diluted especially compared to its all-time high. These factors may dent may have eroded some investor confidence in XRP, but should you still consider adding XRP to your crypto portfolio?

XRP is a long way from its historic high but so is almost every other cryptocurrency that has been around for more than 2 years. The lawsuit between Ripple and the SEC has dragged on for years with no end in sight and while it threatens to disrupt Ripple's operations and XRP's value, this has not been the case. Ripple continues to expand the corridors for its ODL service into more countries.

Ripple's most recent corridor launch was announced in May paving the way for rapid transactions between Mexico and the EU. This has seen Ripple's services grow, especially due to its adoption in the banking industry. Ripple's goal is to improve the speed and efficiency of global transactions across the world.

Ripple has also been quite active in the crypto blockchain and crypto space. This is evident through social engagements between its executives and leaders in multiple countries. Its CEO, Brad Garlinghouse recently discussed the future of blockchain and crypto regulation with Georgia’s Prime Minister Irakli Garibashvili.

What does the future have in store for XRP?

The outcome of the Ripple lawsuit will likely have an impact on XRP's price. However, the fact that Ripple has continued expanding and operating might already be a sign of what is to come, although the final verdict is anyone's guess. However, ODL's rapidly expanding adoption and usage also translate to more adoption for XRP and this might play out well for its price action in the future.

XRP traded at $0.397 at the time of this press, after a 5.39% price drop in the last 24 hours at press time. This performance reflects the global crypto market performance, whose market cap dropped 4.90% to $1.24 trillion at the time of writing. This means XRP’s price action remains highly correlated with the rest of the cryptocurrency market. 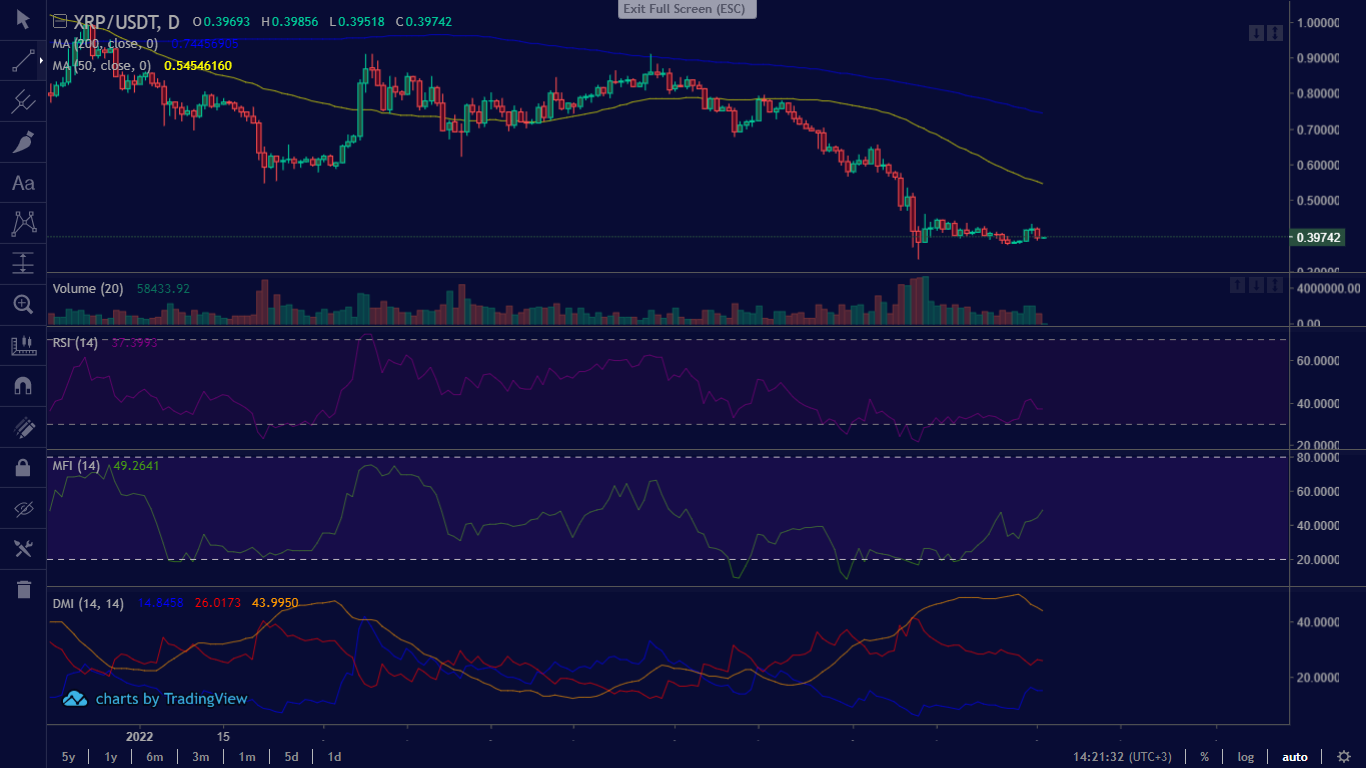 Ripple is still trading within the same price range where it has been stuck since the second half of March. This is despite an increase in volatility towards the end of the month. The price ended the month with its RSI at the highest level since mid-May, while the RSI highlights significant accumulation in the last 10 days. Meanwhile, the DMI registered an uptick in bullish momentum.

XRP might be ready for more upside considering that it has been bearish for quite some time. However, its price action is still restricted by the correlation with the rest of the crypto market which is currently still in fear territory.

Despite these challenges, XRP remains one of the most promising cryptocurrencies given the magnitude of the problem it currently solves in the banking and remittance industry. One can argue that the discount at which it is currently trading provides a good opportunity to accumulate more. However, the crypto market is still at risk of more downside and there is still some uncertainty regarding the Ripple lawsuit’s outcome and its impact on XRP’s performance.