Chainlink’s native cryptocurrency LINK turned out to be one of the best performing cryptocurrencies in the first week of June. It delivered an impressive rally even as most of the top digital currencies remained confined within the narrow range.

To put its performance into perspective, its current rally kicked off from end-of-May lows near $6.22 and it peaked at $8.97 on June 7 which is its highest price level in June so far. This means it rallied by roughly 44% in less than 2 weeks. This also means it managed to overcome the narrow range in which it traded from mid-May to the end of May.

LINK traded at $8.33 at press time after rallying by roughly 9.05% in the last 24 hours. This means LINK also managed to overcome the bearish sentiments that resulted in a bit of a market-wide drop during Tuesday’s trading session.  However, LINK is currently approaching a descending resistance zone in its price structure, which means that its rally might be about to experience some bearish correction. 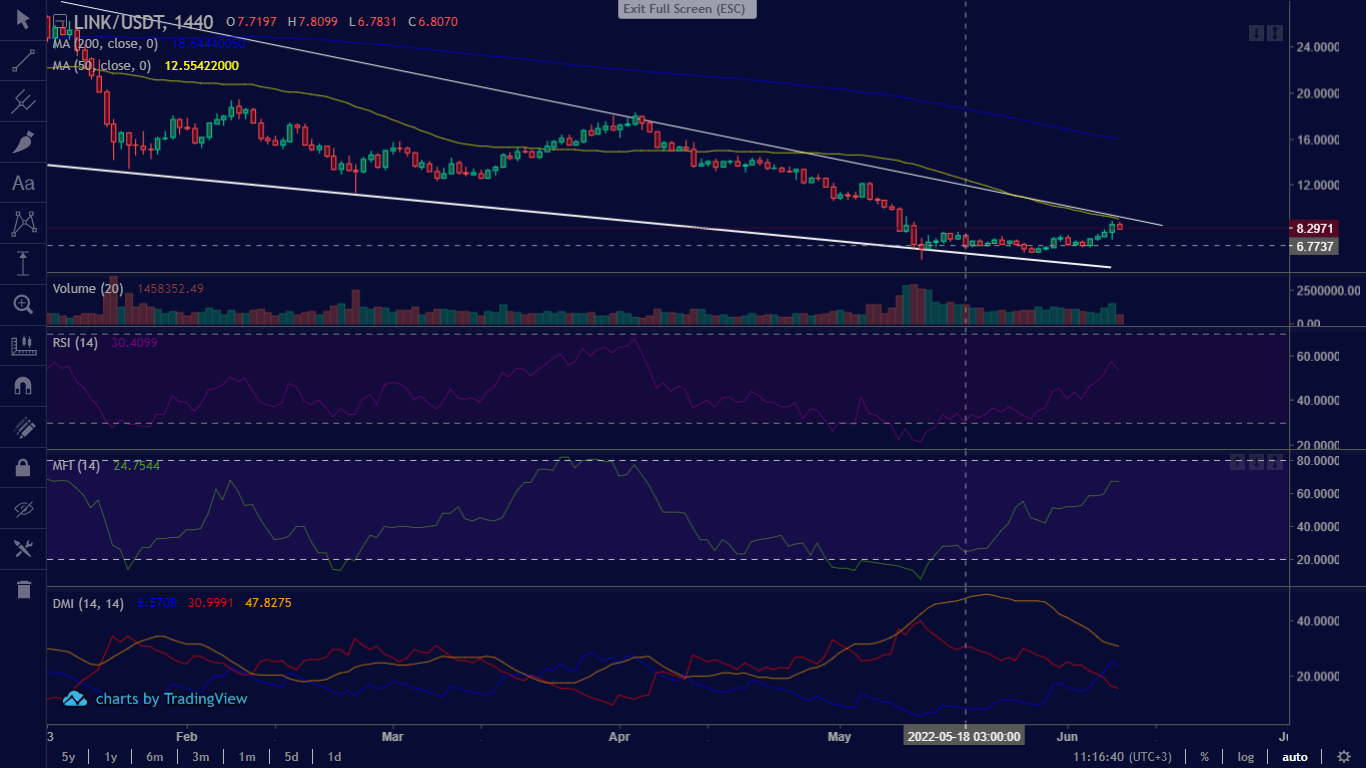 LINK's price action has already started to show signs that the bullish momentum might be weakening. For example, its RSI has already shown some reversal after crossing above the 50% line and the MFI has leveled out slightly. The +DI shows a similar outcome, suggesting that the bulls are struggling to maintain their dominance after the rally.

LINK has not fully interacted with the descending resistance line yet but we will likely see a lot of volatility once it does. A potential reversal is expected to take place selling pressure increases near or at the resistance line.

A look at what is happening on-chain reveals that LINK’s market cap has already started cooling down after its latest rally. This means not much upside is expected especially now that money is flowing out of the coin. The supply held by whales metric on Santiment reveals a similar outcome. Whales have reduced their LINK bags significantly since June 5.

If we judge LINk’s current performance by its on-chain metrics, then we can conclude that any upside in its price action is currently supported by the retail market. However, this means that retail volumes will eventually fail to support more upside especially now that the price is trading within a resistance zone after a substantial rally.

Can LINK hold on to its gains thanks to improved market sentiments?

It would be theoretically possible for LINK to not only hold on to its gains but also potentially achieve more upside. However, this outcome would require a strong catalyst that would change the tides in favor of the bulls, triggering an inflow of investments into top cryptocurrencies.

It looks like LINK is due for a bearish retracement unless a major catalyst takes place within the next few days, or unless whales decide to accumulate in bulk. However, a short-term downside correction also represents an opportunity to buy at a lower price level, given that LINK is still trading at a massive discount from its all-time high.