Bitcoin’s performance has been nothing short of spectacular over the last few months but its performance in the last few weeks has not favored hodl’ers. Its price has largely been confined between $53,000 and $58,000, which means there have been some opportunities for retail crypto traders.

Altcoins seem to be a better fit for buying low and selling high, due to higher volatility and price movements, delivering more gains than what bitcoin has to offer. Here are some of the altcoins that are hot this week: 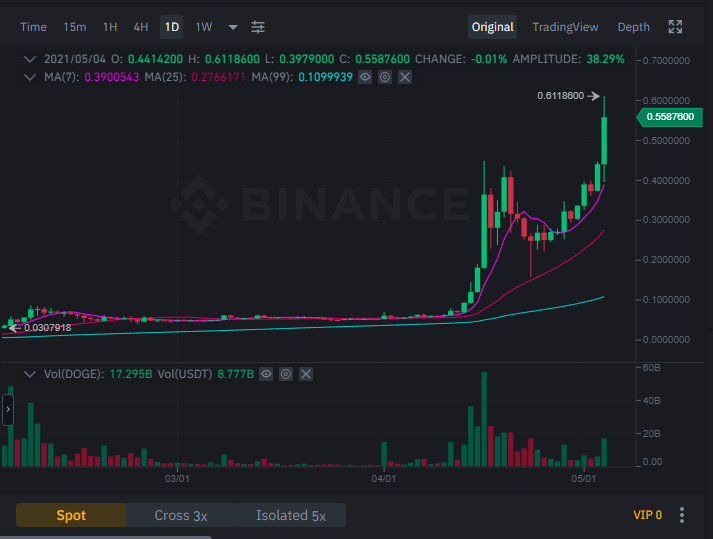 Dogecoin has no doubt been the best performing cryptocurrency in the last 24 hours and the last 7 days thanks to the ongoing hype.  The meme coin rallied from the day’s low at $0.39 to the day’s high at $0.61 with a 24-hour trading volume of more than $17 billion. Dogecoin has been trading above its 7-day moving average since April 28, indicating strong bullish momentum.

Interestingly, Dogecoin’s meme status seems to be attracting a lot of speculative buying. It has a huge following of enthusiasts determined to ‘take it to the moon’ and has also been receiving a lot of attention from celebrities such as and Mark Cuban who recently talked about it on The Ellen DeGeneres Show. Tesla CEO Elon Musk is expected to make some remarks about it while hosting Saturday Night Live on May 8, a scenario that may fuel more bullish momentum. Dogecoin’s impressive performance was also supported by its listing on Gemini and eToro.

ETH is the second-largest cryptocurrency in terms of market cap and it happens to be one of the week’s top altcoins. It gained more than 23% in the last 7 days indicating strong momentum which pushed it well above $3,000, marking new historic highs. ETH traded as low as $3,160 and achieved a high of $3,527 in the last 24 hours.

The altcoin garnered strong support at around the $2,177 price level on April 24. Strong bullish momentum pushed it above the 7-day and 25-day moving average indicators, and it has remained there backed by heavy speculation as investors seek out bullish opportunities beyond Bitcoin. Some of the gains were fueled by the recent gas limit adjustments on the Ethereum blockchain which boosted transactions speeds to 16.5 transactions per second.

XRP experienced a substantial bull run in April 2020, with the price peaking at $1.96 before a pullback that sent it below its 7-day moving average and 25-day moving average. The altcoin traded as low as $1.39 and as high as $1.55 in the last 24 hours.

XRP’s price performance appears to be cooling down but that will most likely not be the case now that Ripple is about to settle its lawsuit filed by the SEC. The end of the lawsuit means XRP might find favor with investors. The SEC lawsuit claimed that XRP is a security while the company argued that it was a currency. Ripple is also reportedly planning to pursue an IPO, which combined with renewed backing by investors could be great news for XRP enthusiasts.

Litecoin has surged 16.26% in the last 7 days on strong buying as crypto buyers shift their attention towards altcoins that have potential for strong gains. The coin hit an all-time high of $335.69 on April 17, but Bitcoin headwinds contributed to a huge pullback. However, the cryptocurrency managed to find support at around $209 and the bulls took over, sending it above the 7-day and 25-day moving averages.

The percentage gains especially for lower-priced altcoins present opportunities for traders to make more money riding the bulls than they would have if they staked their money on Bitcoin. Note that there is still a substantial risk of loss, thus the need to exercise caution.