Elon Musk, the CEO of Tesla, has been one of the proponents behind the 2021 crypto bull run, but it appears that he single-handedly sent the crypto market, including Bitcoin, on a freefall on Wednesday. If you woke up and checked Coinmarketcap this morning, you would find that it is heavily decorated with red in the 24-hour percentage price change section, thanks to Musk’s crypto bombshell on Wednesday.

The Tesla CEO tweeted on Wednesday that his company will no longer accept Bitcoin as payment by EV buyers. However, the reason for backtracking on the digital currency as payment for Tesla cars is based on concerns about Bitcoin mining using electricity generated from fossil fuels. 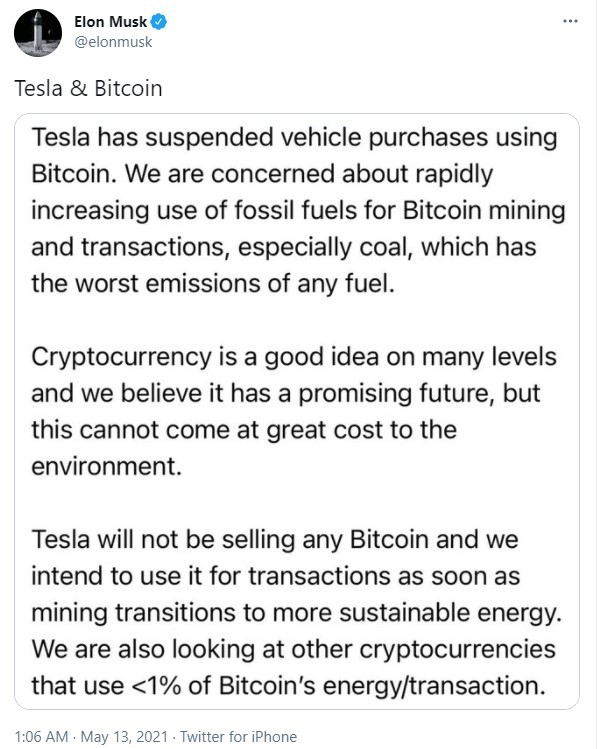 Tesla started accepting Bitcoin as payment in February this year, around the same time it spent $1.5 billion to purchase the cryptocurrency.  In its SEC filing in February, Tesla also highlighted that it might be interested in buying other cryptocurrencies in the future. The filing and announcement were positive news for the cryptocurrency market, which has been bullish until now.

Bitcoin tanked by more than 5% within the first few minutes after Musk’s tweet and has so far dropped by 11.10% in the last 24 hours. 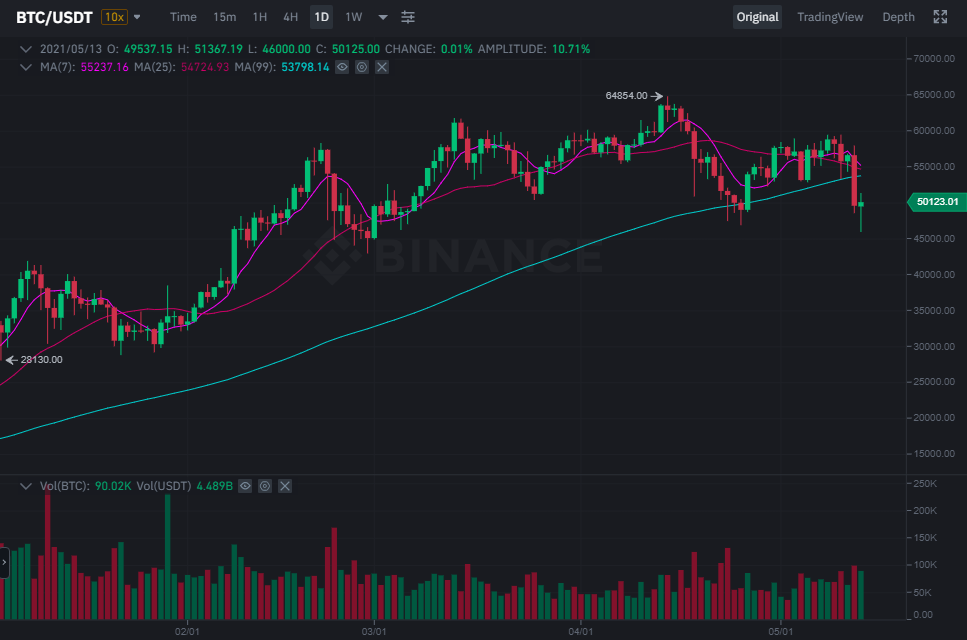 Elon Musk’s tweet about Bitcoin sent it crashing below $50,000 for the first time in May. The cryptocurrency found support at $46,000, which is its current 24-hour low thanks to a pullback that has already sent it back above $50,000. Now that the price is back within its weekly range for the past seven days, it will likely surpass its current 24-hour high of $51,367.

Bitcoin's current price is still below its 7-day, 25-day, and 99-day moving averages, which is in line with the strong bearish performance in the last 24 hours. Meanwhile, robust buying volume indicates strong recovery, explaining the price recovery back from the 24-hour low and possibly indicating that we might witness some more upside.

The last 48-hours have demonstrated just how much influence one man can have over the crypto market. Fortunately, his influence seems to be in favor of a crypto-future because Tesla still holds a substantial amount of Bitcoin, which it acquired in February. This is still a good sign because it proves that the company remains interested in crypto, and it plans to hold on to its Bitcoins. Institutional backing remains strong and is essential for avoiding a crash as big as the one in 2018.

Musk’s tweet also highlighted his concern for the environment. He noted that Tesla plans to resume accepting Bitcoin as a payment for vehicle purchases as soon as crypto miners start using sustainable energy. Although his tweet may have hurt the cryptocurrency market, it is a classic example of someone with great power using it responsibly, or irresponsibly, depending on how you view it.

The Tesla CEO is using his influence to encourage the pursuit of more environmentally-friendly practices. Crypto mining has been controversial because it uses a lot of electricity generated using fossil fuels. This goes against Tesla's mission of pushing towards a sustainable future. Musk's tweet could be the most crucial nudge needed to align the cryptocurrency industry with the green energy revolution and sustainability agenda.

Meanwhile, the number of companies that are interested in Bitcoin is steadily growing. Some of the companies that have purchased the cryptocurrency include Nexon, Metromile, and Square. They view Bitcoin as a digital gold that can be used as a hedge against inflation, thus an essential asset, especially with the global economy suffering under the weight of the pandemic.