The cryptocurrency market has been highly volatile in the last seven days, and although the week kicked off with some bullish momentum, the tables seem to have turned in favour of the bears. The same appears to be happening to altcoins, although some are currently still in the green. Here is a recap of some of the top winners and losers in the last seven days. 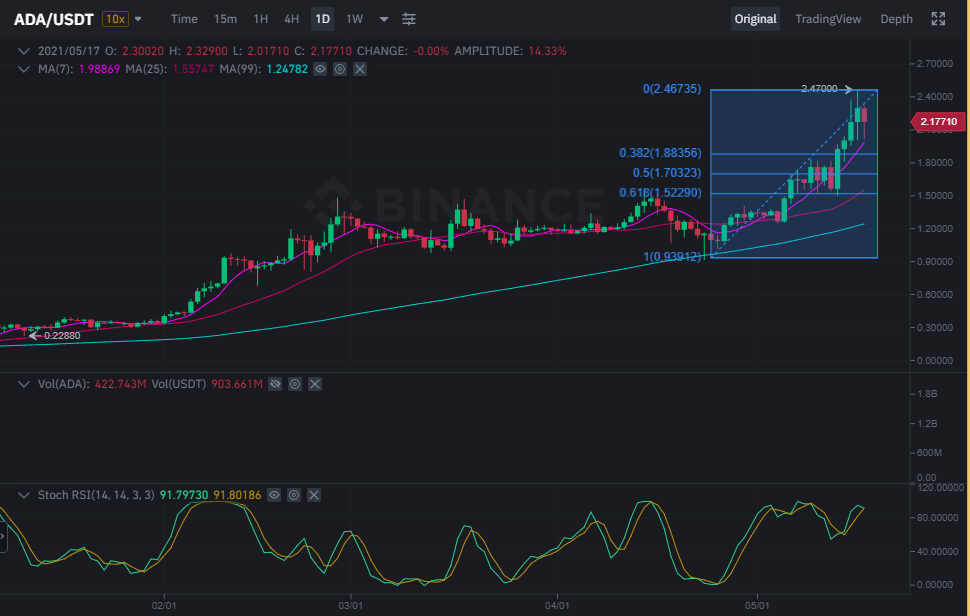 ADA’s current bull run experienced support at around $0.92 on April 23, which was the previous resistance level on February 10. Fibonacci retracement from the most recent support to the current high at $2.47 suggests that we should expect some price bounce back at 1.88, 1.69, and 1.50 if the price continues to drop. The stochastic RSI is currently at 92.56, indicating that the price is currently in the overbought region. There is currently low selling volume, and the price is still above the 7-day moving average. 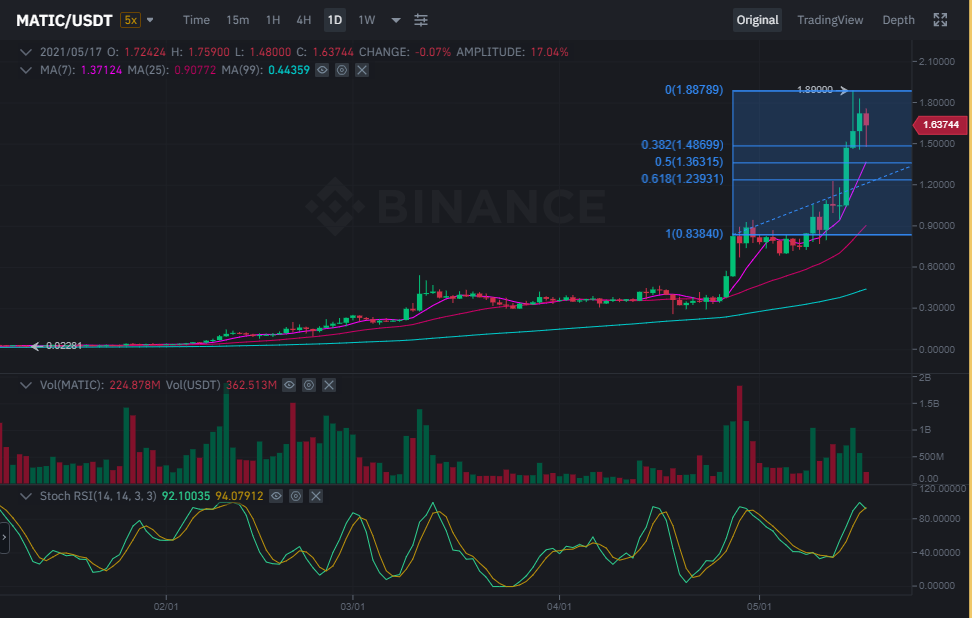 MATIC's recent gain is primarily associated with bullish Ethereum prices since it is an L2 Network designed to offer scalability to the Ethereum network. MATIC’s current price action indicates a slight pullback from its all-time high but its performance in the last 24 hours shows that some lost gains have been recovered. On the technical side of things, the price tested support at $1.48 and is still trading above the 7-day moving average. The volume indicator shows low selling pressure, although it is worth noting that the stochastic RSI is in the overbought region at 91.5.

KSM is listed at position 39 on Coinmarketcap, and it is up more than 27% at the time of this press, making it one of the biggest gainers in the last seven days. It is currently trading at $566.87, an impressive rally considering that it traded as low as $67 on January 1. This means that the KSM is up 746% year-to-date. Kusama reached an all-time high of $620 just two days ago on the heels of Parachain auctions coming up soon. 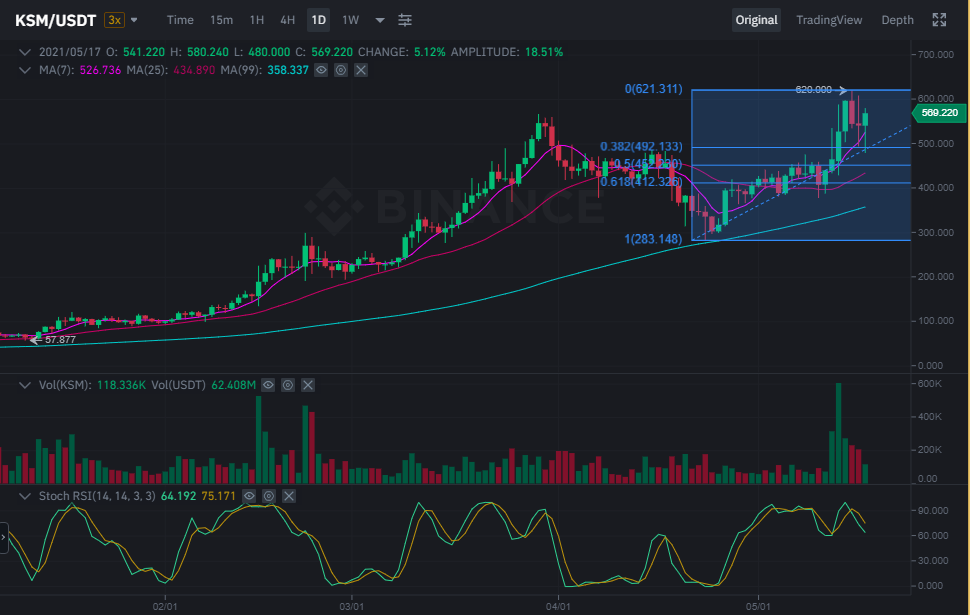 We traced Fibonacci lines from the $286.17 support level, which was the resistance level on February 22 and 23. The price has already tested new support at the $480 price level. Bullish volume seems to be regaining traction, and the stochastic is under 70, which means there is potential for more upside. The price has already crossed above the 7-day moving average, indicating a healthy upside.

AAVE seems to have gained more popularity after its launch on Polygon, encouraging more transactions which pushed it to a new high of $634.32 on May 14. Interestingly, the cryptocurrency traded as low as $78, which means that it is up 713% year-to-date. 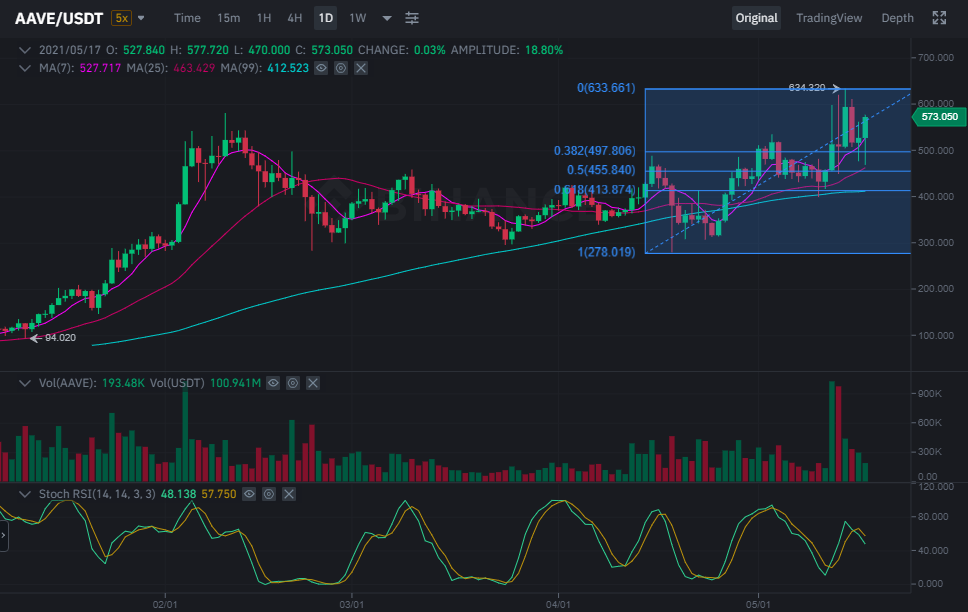 AAVE’s performance is up 5% in the last 24 hours and more than 19% in the last seven days at the $578.55 price level. It has already crossed back above the 7-day moving average supported by decent volume at 194k. The Stochastic RSI is below 56, indicating a healthy range below the overbought region.

Solana’s performance has been exceptional, perhaps supported by the “proof of history” approach to validating transactions. Solana was up 6.21% in the last 24 hours and 11.76% in the last seven days at the time of this press. It traded as low as $1.54 on January 1 and recently peaked at $52.6 on May 16, which means it has surged by around 3,415% YTD. 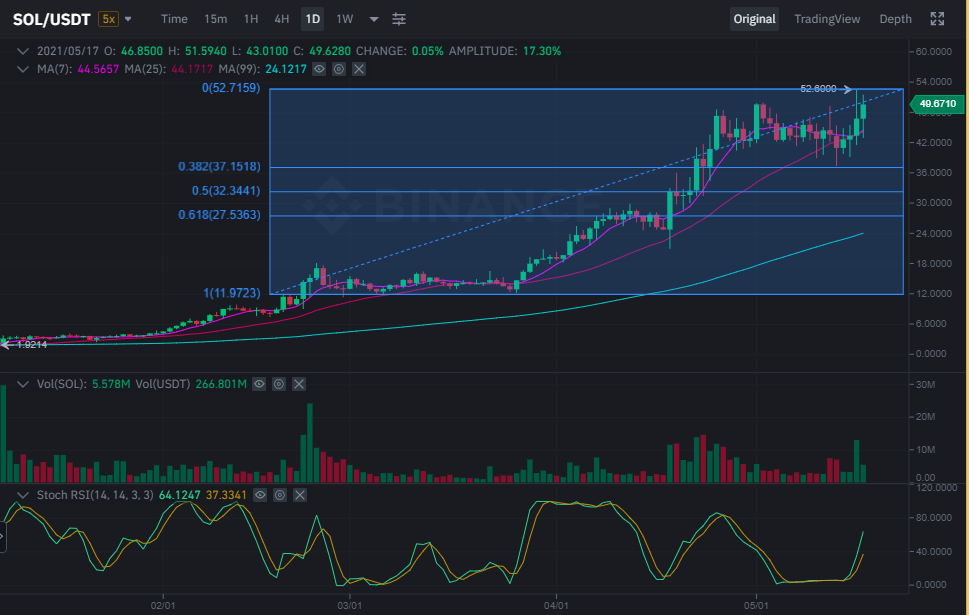 Solana’s current bullish momentum builds on support at around $37. It is currently trading above its 7-day moving average, indicating strong bullish performance, and the stochastic RSI suggests that it is still within a healthy range. All of this means we might still see the price go up some more.

Bitcoin is down 8.25% in the last 24-hours and 22.72% in the last 7-day at the time of this press. The cryptocurrency has been on a downtrend that was primarily fuelled by Elon Musk's decision to stop accepting Bitcoin as payment for Tesla EVs. Plus, his most recent rants on Twitter that suggest that Tesla may sell all its BTC in the near future. 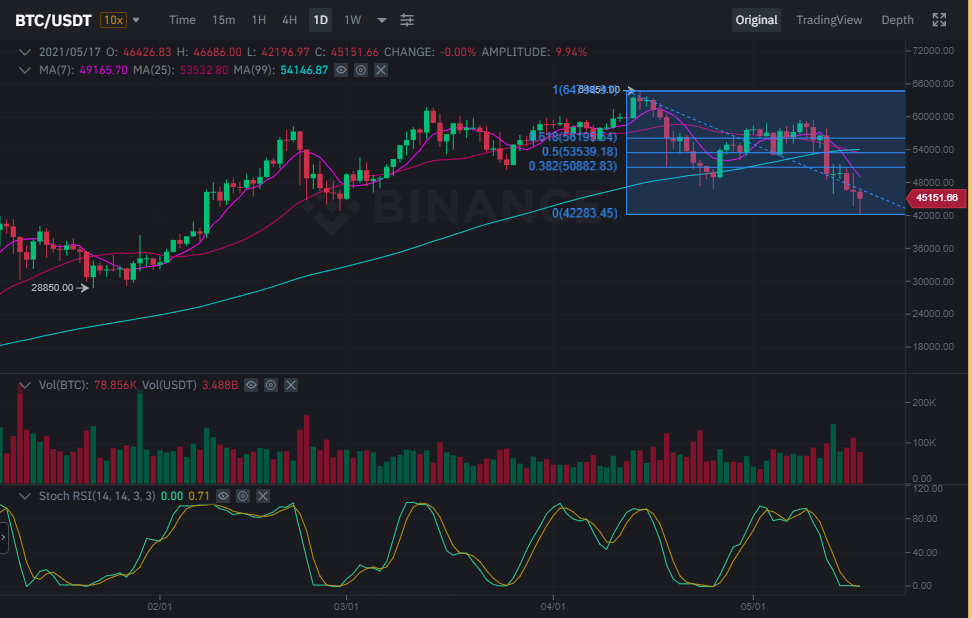 Bitcoin is currently on a bearish trend, confirmed by the vigorous selling in the last three days. Its price has also inverted below the 99-day moving average, but it seems to be finding support around the $42,200 price range which was the resistance level on January 8. Bitcoin’s current price at $45,151 is a 30.5% drop from its all-time high.

BCH is down 10.77% in the last 24 hours and 23% in the last seven days. Its bearish performance is associated mainly with BTC's price drop. 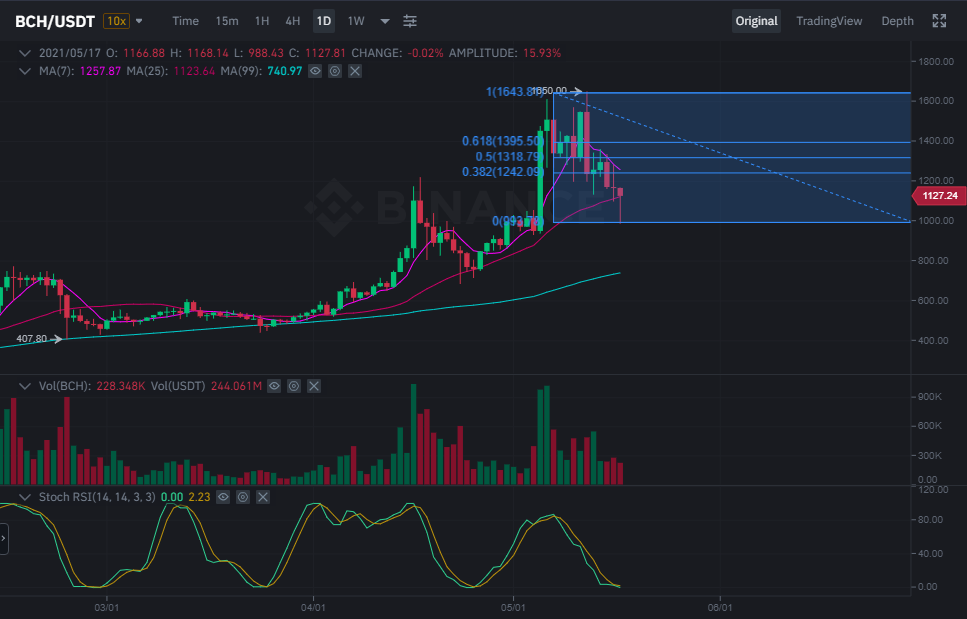 BCH is currently trading at $1,118.9 after finding support at around $988. The volume seems to be losing traction, and the price is currently bouncing back above the 25-day moving average. The stochastic RSI currently indicates that the price is oversold, which supports the ongoing retracement back above $1,000, suggesting that perhaps the bulls are about to take back control. 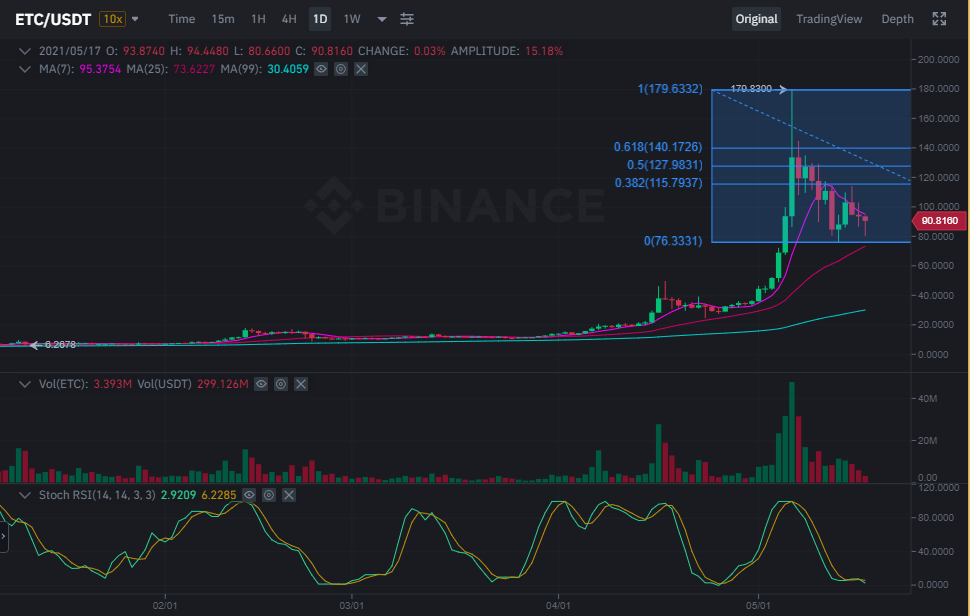 ETC recently bounced back after gaining support near $76.14 and is currently trading at $90.81. It is currently experiencing low selling volume and is already in the oversold region as per the Stochastic RSI. The price is still below the 7-day moving average but still above the 25-day MA and the current sentiment is that it will at least recover to $115. 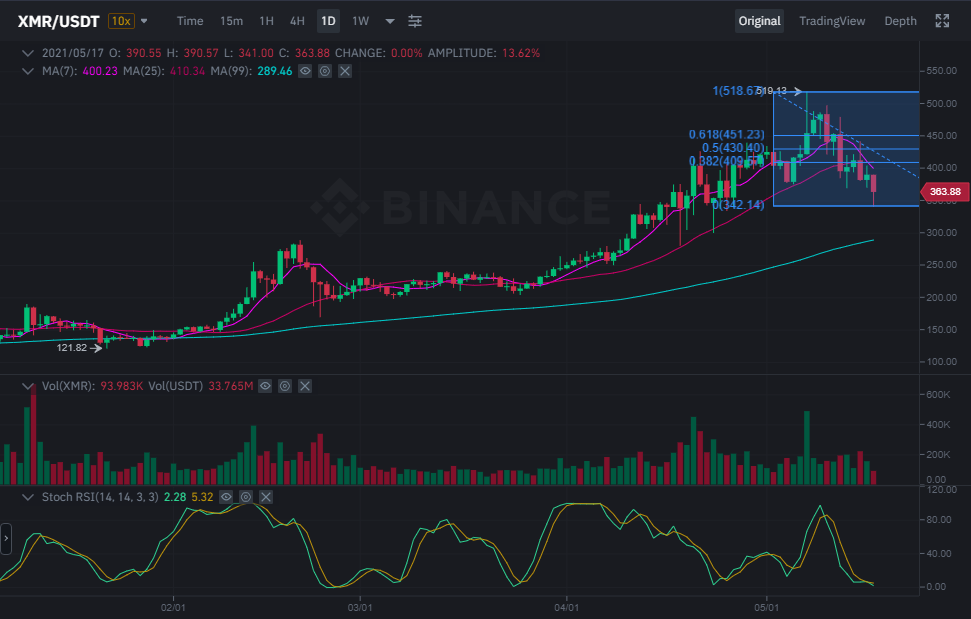 XMR’s bearish downturn this week seems to have found support at $341 and has already bounced back to its current price at $363. It currently has a bullish outlook supported by low selling volume. The stochastic RSI shows that XMR is currently oversold but traders should continue to exercise caution because it is already below its 7-day and 25-day moving average. 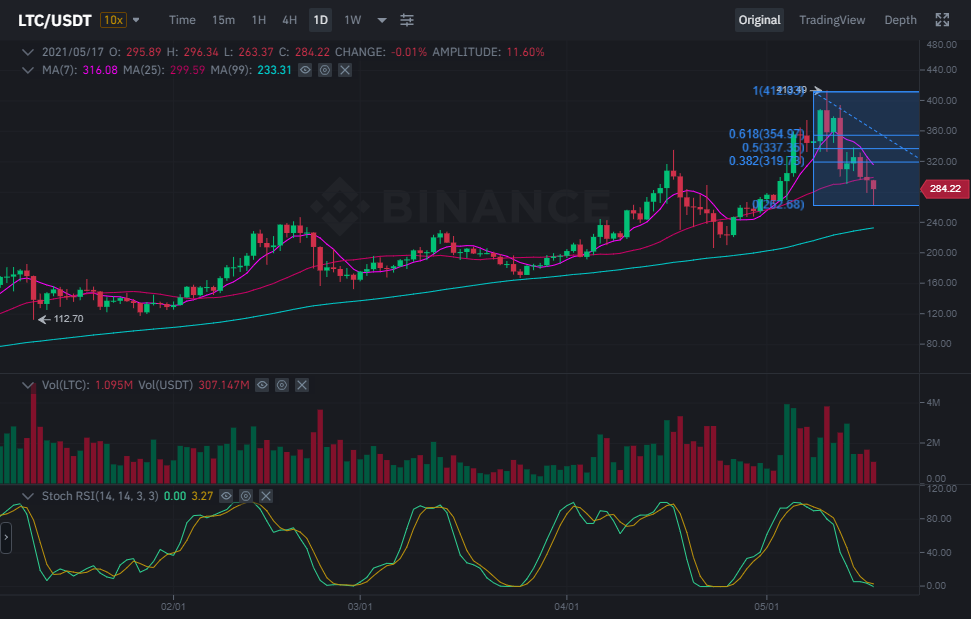 LTC’s technical outlook favours a bullish performance which should send the price at least back to $320. The stochastic RSI indicates that the price is currently oversold and is trying to break above the 25-day moving average. Selling volume also seems to be on the decline, a sign that we might see some bullish strength regaining control soon.